One of the things that has been most trying about marriage has been the integration of our lives together when, prior to meeting, we were both fully-functional, autonomous human beings. In particular, matters of budgeting can be difficult, and after investing most of our savings in the a new front porch and cellar ceiling, Sonja was not about to acquiesce to building still more expensive racks in the wine cellar. Meanwhile, I had boxes upon boxes of wine sitting around that contained God-knows-what (yes, obviously they contained wine, but that’s not terribly helpful when you’re trying to find something specific) and felt that I needed more racks in the cellar immediately. With that in mind, and always attempting to avoid doing something worthy of divorcing me, I devised a scheme for putting in some low-cost racks that, I thought, turned out fairly well.

I began with the idea, and once I had it visualized, felt pretty good about it. I thought about all of the possible ways it could go wrong, schemed, problem-solved, and then ordered my materials. I started by finding some nine-bottle side-display racks on Amazon. The style is common, and as I hunted and hunted I kept finding lower and lower cost versions. It began at $22, then $19, then $15.99.  I ordered three to see if I liked the quality, and they were solid.  I waited for Prime Day, and when they didn’t go on sale kept hunting, eventually tracking them down for $13.99 each and ordering 28 of them. Total cost: $392. I pulled them all out of their boxes and assembled them with my rubber mallet (sold separately).

After the racks had been acquired, I went to Menard’s. I bought a hammer drill for $20, some concrete anchors, liquid nails, and a bunch of battered old pine 2″ x 2″ posts. Total cost: $80. Running total: $472.  I brought it all home, drug the lot down to the cellar, and continued to conceptualize.

Pretty quickly I realized that my brick walls were somewhat uneven, my pine beams warped, and that a $20 hammer drill is just that, and may not be equal to the daunting task for which I, but probably not its manufacturer, had intended. I called Austin at Old World Craftsmen who, along with Dave, had been part of the cellar project all summer long, and he agree to help me out. His help included the use of his far superior implements, and soon we were cooking with fire. From there, the racks went up pretty quickly. 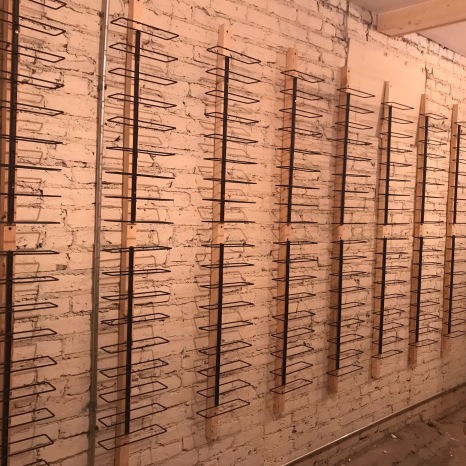 Once we had the racks up, I paid Austin, bringing the total cost of the project to around $650. Not bad for a tight budget, and less than 20% what it would have cost to put up racks like the other ones I’ve got. From there, I was left with the daunting task of putting bottles on the racks. I wish that the following images could be accompanied by banjo music and a stop-action video of me running around the cellar frantically like an ant, but you’ll just have to imagine all of that I suppose. 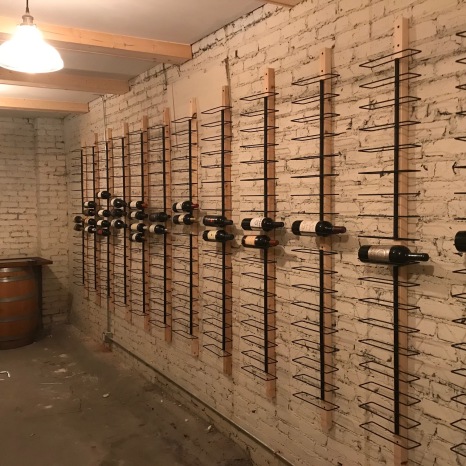 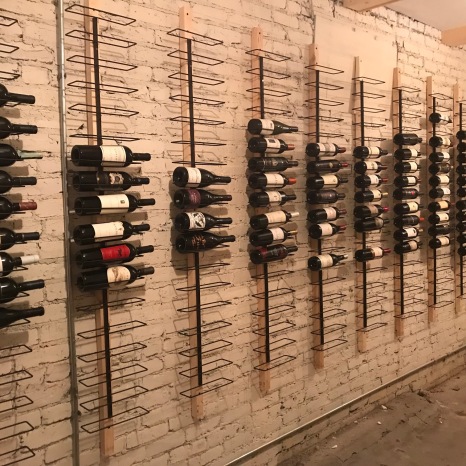 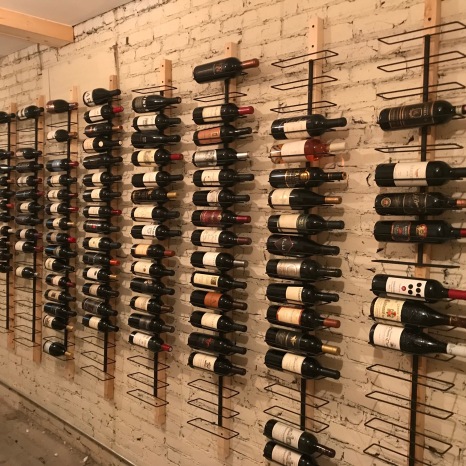 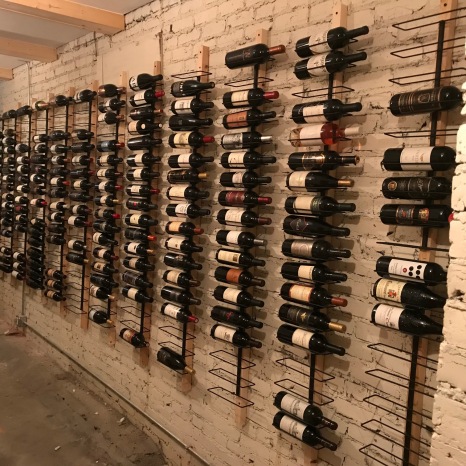 I placed each bottle gently upon the racks, remembering each screw head that I tore off with my drill, every small crack in the pine, every doubt I had despite the fact that each rack was anchored to the wall by liquid nails and five individual concrete anchors, to say nothing of the fact that gravity is on my side, the racks pulling down rather than out, if anything strengthening the grip of the anchors. Still, every time I step into the cellar, I worry about finding nine shattered bottles of Napa Cabernet on the floor.

When Sonja returned from her business trip she followed me, unprompted, into the cellar one night. “Wow,” she said. “Looks good.” We admired the space the thin racks left us and began scheming about hosting dinners down there.  I drug the boxes to the curb for the recycling and surveyed my work. The floor is still dirty, one of the corners still full of paint and miscellaneous project remnants, and I have misgivings about our dehumidifier, but by and large the cellar has come together nicely. I appreciate those of you who have read the previous eight installments of “The Wine Cellar Chronicles” and who can join me in appreciating the journey. I hope someday soon perhaps you’ll join me in the cellar. I’d love to share a glass of wine with you down there, now that it’s worth spending time in.

Cheers to finding a way to get things done on a budget, and happy Friday my friends!

2 responses to “The Wine Cellar Chronicles, Part IX: “Style on a budget.””