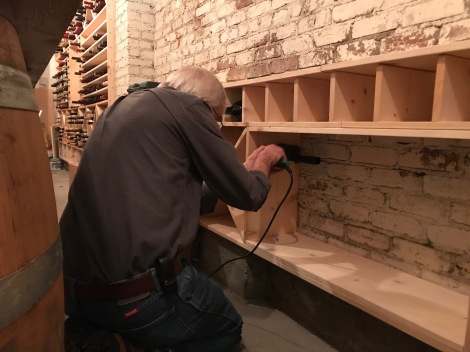 Three or four days ago, on April 19, a magnitude 3.3 earthquake hit North Platte, Nebraska (you can almost hear my readers in California roll their eyes, can’t you?). When I was a little kid, I remember thinking it was “cool” that we’d had an earthquake in Valentine, even smaller than 3.3 if I recall. I slept through it. While earthquakes are a massive and life-threatening problem elsewhere, here in the Great Plains, they occur, but don’t do much. If I cold get Lloyd’s of London to call me back about insuring the contents of my cellar, something our current home insurer insists he can’t do, I wouldn’t sweat it. But until then — and with what occurred a few years ago in Napa in mind, an earthquake that sent thousands of barrels and bottles smashing to winery and cellar floors, I felt that I needed to take a few extra precautions.

I’d previously borrowed a hammer drill, but struggled with the mechanics of it, so yesterday my dad, already in town for Zooey’s first birthday, brought his into the cellar and we sorted it out. I’d purchased a few little brackets and some masonry anchors. Gravity plays the biggest role in keeping the long shelf settled, but a little extra precaution seemed prudent.

Using my masonry bits, dad drilled the holes and I set the anchors. We did have a bit of a snafu when the bit got stuck in the ancient brick, but pliers and wiggling proved equal to removing it, unscathed, from the hole. In all, it was the work of maybe ten minutes, and in the end, we’d set four brackets into the wall, and into the shelf, right above the Champagne storage, relatively inconspicuous, and hopefully 100% earthquake proof.

The thing I like most about working on the wine cellar is the time with my mom and dad, who help with everything from conception to the work I don’t have the tools or experience to do. I fear sometimes that I’m asking too much — pouring cement is hard work, as are a number of aspects of building shelving. That said, especially on short, little tasks like this one, I enjoy the time together, and though its a bit generous to my role, I enjoy telling others that “we” — my parents and I, built it when I show them.

As I wrap this post up, I’m ready to head to the gym to try to do a long, slow, 7-10 miles. I’ve been suffering from a calf injury all spring and have re-aggravated it several times in the past month. The Lincoln Marathon, which I’m slated to pace for the seventh time with my close buddy Brian, is less than two weeks away. My pace team coach told me to rest and rehab last week, and to take one more shot at it this morning. I’m nervous. If it hurts again or gets re-aggravated yet again this morning, I’m out of Lincoln for the first time since returning from London in 2013. I don’t really want to go right now, it frightens me so much, but I suppose I have to. Rest assured I’ll have something interesting to write about tomorrow. Wish me luck!