By this point, I think I’ve more than adequately told and retold the tale of arriving home to Sonja, sobbing, because in the same day she all but simultaneously wrecked my car and flooded my wine cellar. As it turns out, the “wreck” was a scratch that I care so little about that I put the $800 insurance check toward the principle on the car (rather than fixing it), and the “flood” was juuuuust enough water to justify having the front porch and cellar ceiling redone professionally. I’m glad I didn’t hold either of those things against my beautiful wife, because ultimately they both worked out in our favor. 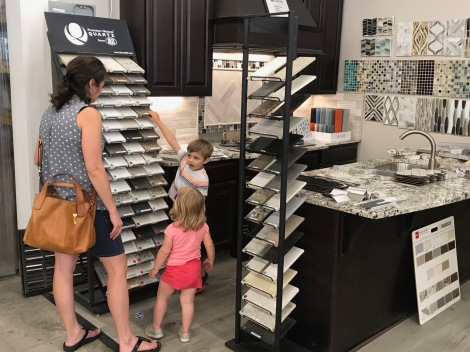 It started with Titus and Zooey picking out some tile…

…and ended with a gorgeous new front patio that we love sitting on. I already wrote about this, however, so we’ll move on. If you want to read more about the front porch (and the totally baller Meadowcroft sparkling wine we used to christen it), click here:  https://itheewine.com/2019/06/26/a-christening/ 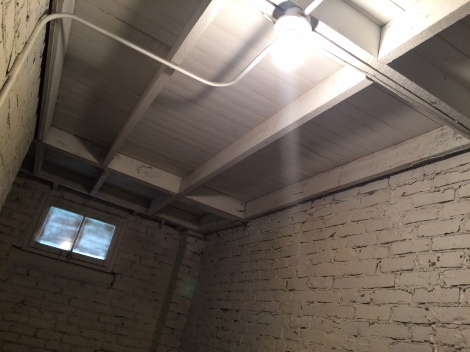 But that only took care of half the problem. Yes, it stopped the leak; we hired Old World Craftsmen, who I swear don’t pay me to love their work as much as I do, and they did a killer job — their attention to detail was phenomenal and the results speak for themselves. So, when the front porch was finished, I asked them to do the cellar ceiling as well. If you look above, you’ll see what I saw when we bought the house in 2015. It’s what glass-half-full people like me call “potential” and what practical people call a nightmare. Obviously, there’s just a skeleton, a leaky skeleton as we soon learned. But our budget, having just purchased our dream house, was equally skeletal. Impatient SOB that I am, I initially attempted to take matters into my own hands.

If you ever seen that commercial with the psycho in it who, if memory serves, shoots a hole in the bottom of a boat with a shotgun and then sprays it with canned rubber and floats around on a lake in it, well, then you might wonder why somebody with four college degrees would watch that and then decided to emulate the behavior of that numskull — but I did.  With easy-squeezy-lemon-peezy or whatever the hell that tar-in-a-can is called, I climbed up a ladder and began spraying the ceiling. How this would insulate I didn’t know. The fact that I was spraying it on the undercarriage of the porch and that if water found its way that far it was, by virtue of gravity, not about to stop there, was one of those obvious common sense things that people who write and teach about poetry can’t be bothered with. Fortunately, within the first two cans of u-can-spray-tar I got some in my eye, and that was enough to make me stop, succeeding where common sense and the laws of physics had failed. 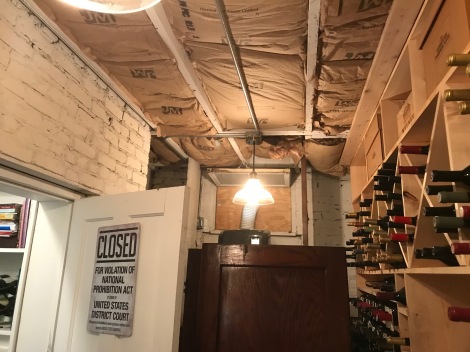 A year passed. The wine in my cellar was subjected to horrifying temperature extremes and unregulated humidity. I became complacent, dejected. Then one day, a few years ago, after my dad helped me build a really cool rack for the cellar, I got my groove and gumption back and realized I needed to insulate the damn thing to keep wine at a steady temperature. If you want to read more about the rack my dad and I built, and you really should, click here:  https://itheewine.com/2017/08/09/the-wine-cellar-chronicles-part-ii-nice-rack/

So I hung up a bunch of insulation, which is itchy and ungratifying work, but in the end did a lot to control the temperature in my cellar — though not enough prior to the work Old World Craftsmen did to the top side of the thing. So, once the front porch immediately above the cellar was completed, I asked Dave at Old World Craftsmen to tackle the cellar ceiling, and he graciously (and probably against his better judgement) agreed to do it. 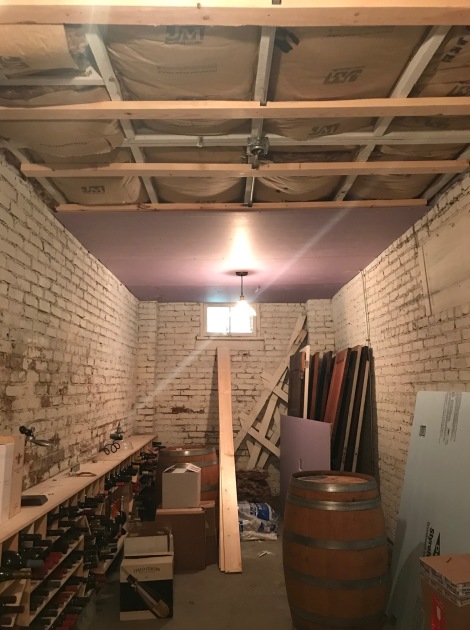 After finishing out the ceiling with still more insulation, the guys at Old World put up additional supports, and then dry wall to give it a finished look.

When the dry wall was up, they added six inch pine beams which match the racking already in the cellar and simultaneously match the rest of our craftsman house. The beams are placed every four feet, and give the room an aesthetic it was absolutely lacking before (see any of the pictures above this one).  I’m being serious when I say that I was so impressed with the guys from Old World and their work — if you live in Omaha and have a home worth doing work on, they are the only people I’d call. They’ve been reasonable in price, fair, honest, and knowledgeable about everything I’ve asked, and the work they’ve done on my cellar is top notch. I hope you’ll come by and see it for yourself sometime.  It is finally, finally beginning to take the shape that I had envisioned when, back in 2015, Sonja was all kinds of excited about the master suite, and I was like Yeah, but did you see that three-hundred-square-foot torture chamber under the front porch?

The cellar still has a ways to go before we can use it the way I’d like, but it’s getting there, it really is, and having the roof and ceiling done is a huge relief. We added a better air conditioning unit and I closely monitor my dehumidifier while Sonja helps me monitor the temperature in the cellar — which holds consistently in the low 60’s, I’m pleased to report. With some luck, we’ll be hosting dinners in that room and toasting to Husker victories, good friends, and memories yet to be made before 2019 is over. I hope you’ll be there.