I never could have admitted this to anyone outside of my inner circle prior to my trip, but I had some misgivings about having my flights routed through Istanbul. I have, at times, been critical of the Turkish government’s official positions, both in a TED Talk I gave in 2013 as well as in numerous academic articles and book chapters I have published in recent years. You’re unimportant to them, I assured myself, but I think it’s difficult to flip a switch between studying totalitarian regimes and feeling safe upon their soil. To save you the suspense, however, I am not blogging from a Turkish prison cell; I was routed by Turkish Airlines through Istanbul a total of four times and, truth be told, not only was I not harassed or detained for my politics, my flights were very pleasant for the most part.

Given that this is a wine blog, I’ll cut to the chase. I was truly impressed with the wines on Turkish Airlines. To be honest, I googled “Does Turkish Air serve wine?” before departing, wondering if perhaps the predominant religion of the state that owns the airline would dictate a negative response, but I found it to instead by quite the opposite. The selection of wines available were all enjoyable. Interestingly, the stewardesses seemed to regard the French wines, a lineup called Louis Eschenauer, as their default, but had Turkish wines upon request. Fortunately, when it comes to wine, I’m typically pretty willing to ask for what I want. 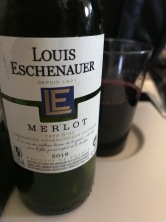 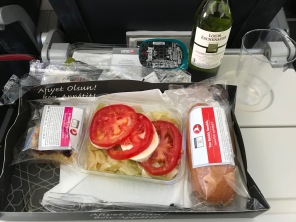 The Louis Eschenauer, aside from being marketed to Americans (hence the varietal being listed on the label of a French wine) were solid. I found the “Merlot” to be delicate yet structured, a bit perfumed, pleasant in the mouth and true to the varietal, while the Chardonnay was light and balanced, highly acidic, with a hint of sweetness. The cuisine, too, as quiet nice, and the wines paired well with them.

Years ago, on a Kenya Air flight, I asked my flight attendant for a Tusker. “You know Tusker?” he asked me excitedly, serving me a pint of the Kenyan-made lager. “I love it,” I told him.” I drank it with my meal and fell asleep. When I awoke, there were two more Tuskers sitting on my setback tray. People are proud of their countries, as they should be, and enjoy sharing what they make. While I had to ask for Turkish wine, Turkish Air most certainly did have it. The Ancyra red, a blend of Cab Sauv and Syrah, was balanced and easy to drink. Fruit driven with some mild spice notes and a hint of leather, I thought it was well selected as the sort of crowd-pleaser one might choose to serve on an airline. The white from Ancyra, which was drier than its French counterpart, was equally quaffable, though I personally preferred the red wine.

Wine was free in coach class, which was a bonus. I would also note that the service was excellent and the food generally among the best I’ve had on airlines, my lone complaint being the return leg from Istanbul to Chicago where, unlike previous flight attendants on other Turkish flights, mine refused to retrieve cognac from first class for me as a digestif. The nerve of some people. The pasta dish was also suspect on this particular leg of the flight, but on the whole it was a perfectly enjoyable experience.

I think its worth noting that my flights from Omaha to Chicago, Chicago to Istanbul, Istanbul to Sarajevo, Sarajevo to Istanbul, Istanbul to London, London back to Istanbul, Istanbul back to Chicago, and Chicago finally home to Omaha, while obviously not the most direct route, ran a sum total of $1,900 and enabled me to do the work I was doing within the scope of my grant, which was a relief. It seems that Turkish Airlines is covering a lot of the globe — I even hear they fly into Rwanda now.  Of course, booking those legs myself would have been a nightmare. I used Executive Travel (.com) and for a very modest fee they took care of all the hassle. If you’re traveling internationally and what you’re trying to accomplish isn’t exceedingly simple, I can’t recommend their services enough. I’ve been using them for more than ten years and it has spared me a lot of gray hair.

I’m generally not a fan of Turkish politics, but then again, I’m not always a fan of American politics either. That being said, their airline offers a tremendous number of flights globally at a very reasonable cost, the service is good, and the complimentary wine more than merely potable. It is my hope to return to Sarajevo to continue my work next summer, and if I do I suspect I’ll be calling up Executive Travel once again and arriving via Turkish Air.