Months passed after the installation of a small, portable system, and the climate in my wine cellar remained consistently between 62 and 68 degrees, despite the scorching hundred plus degree days that were ubiquitous to June and July this year. Sporadic precipitation, severe fluctuation, and other factors that could easily have disrupted my attempts to control the temperature in the cellar were thwarted deftly and daily by the tiny air-conditioning and heating unit we had installed. Finally, after waiting and monitoring, monitoring and waiting, day after day after day, I felt confident enough to build a rack and start moving wine inside.

I had designed the rack months prior, and shared my rough sketches with my dad, who, spurred on by my mom, got to work on the detailed and technical cutting that I could never by myself have done. I went through several variations of the same rough design before I was happy, and my father tweaked it to make it all fit. Then, in very late July, he and my mother arrived on a Tuesday, their F-150 so laden with tools and wood that the bed was sagging. At once we got to work unloading.

The first question was one of leveling. I decidedly did not want to pour cement in the cellar, for a variety of reasons ranging from “I don’t know how” to “It takes too long to set” to “I don’t want to lift it”. Ultimately, I was overruled, and together my father and I purchased, transported, hand-mixed, and poured 500 pounds of cement, creating a thirteen-foot-long shelf for the rack to rest upon. I slept soundly that night. 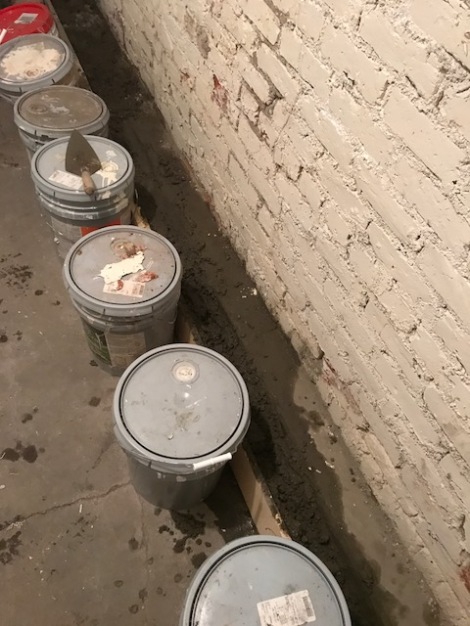 Overnight the cement settled, and while it did we were measuring, cutting, and assembling the bottom portion of the rack. The pre-cut x-boxes that my father had meticulously crafted would offer support and the look I wanted, but they were nightmarish to fit into place. The wood we might have used cost around $60 for twelve feet, while the wood I oped for cost a quarter of that, but came with more knots, minor cupping, and other, er… eccentricities. We used a combination of brute strength and clamps to force the knotty pine into the places we wanted it, one of us holding while the other one placed screws. Gradually, it began to come together.

From time to time, Titus would stop in to visit us. We’d typically stop what we were doing for a quick hug.  I became transfixed on the rack, as did my father. We worked for several days on end. My mom busied herself with helping Sonja, and with moving her son and husband forward with encouragement and, often, much-needed advice.

We moved supplies in through the window, and we built for days, the project appearing at times to have no foreseeable conclusion. After a long while, however, it started to come together. I stuffed some insulation in the ceiling above the rack, which would eventually all but hit the roof, rendering it impossible to insulate later. We went in and out, in and out, cutting, measuring, guessing, and working as hard as we could to make cupped twelve-by-ones of pine fit together flush. We went through a good ten pounds of screws. 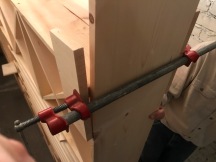 Finally, after nearly a week, the behemoth wine rack was assembled and it was time to set it in place. The gap between the ceiling and the top of the rack is less than one inch, so some precision was required, along with brute force. Joined by my friends Travis, Todd, and Zach, we heaved it into place — but not before threatening to drop it on ourselves on account of our collective and juvenile sense of humor. Fortunately, thanks to my wife, that moment was caught on tape. (See below.)

The fruit of all this labor is a floor-to-ceiling wine rack that spans the length of one half of my cellar. I estimate its capacity at around 80 cases, and it’s strong enough that my son will no doubt one day soon climb it like a ladder. Actually, on that note, I intend to install a ladder, the type you’d find in an old library that slides on a track, in due course. For now, the money for cellar projects is starting to run dry. The rack will outlast me in this house, I have no doubt, and will allow me to move so much wine that is currently stored in the dining room, laundry room, and storage room, out of my patient wife’s way and into a better suited environment. Since we put it up, I go down and visit the rack almost every day. I’ve been thinking I should name it (and I’m open to suggestions). 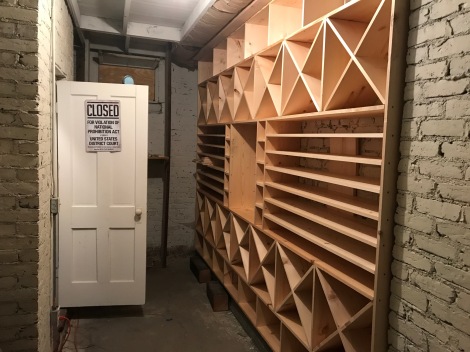 With special thanks and gratitude to:

My father, for his craftsmanship and efforts,

My mother for keeping him going,

My friends for helping lift it into place,

& my wife, Sonja, for tolerating the amount of time and money I spend on this project and my seemingly endless enthusiasm for it.

Thank you all so very much!