Today was a bit rough. I woke up chipper before anybody else in my household and read several chapters from three different books while I knocked out my first four cups of coffee for the day wearing a bathrobe and a delighted smile. Then I ran to the store for sausage and eggs, came back and made breakfast for the family. I wasn’t even done cracking eggs before Sonja was in the bathroom, wrapped around the toilet, and I knew the rest of the day was not going to go as I had planned. My busy agenda for the day, from a much-needed visit to the chiropractor to taking Titus out to lunch, and from grocery shopping and wine tasting to trying to make it to the faculty gathering tonight, were about to go out the window.

It didn’t take long for Sonja to climb into bed and declare herself untouchable. It was my job from there forward to watch both kids all day long — something she regularly manages with ease yet to me feels just slightly less difficult than juggling live baby alligators while riding a unicycle across a tightrope. All that I had needed to do was put on hold, and I was here forward responsible for every nap, meal, diaper, and owie, as well as entertaining both of them indoors on a cold winter day. What… just… happened?

Tonight I taught my son that you don’t need your pizza to be cut up for you.

“Pizza?” This is my daughter’s unimpressed face. One of them, anyway.

By the time I got both kids in bed, with clean diapers and bedtime stories, hugs, kisses, and more, I was tired and cranky and, worst of all, felt as if I hadn’t actually accomplished anything all day. I was also annoyed by a general lack of recognition from my counterpart. In addition to hundreds and hundreds of bottles of wine in the house, there are twenty or so various bottles of whiskey, yet I still used “picking up a bottle of whiskey” as a reason for going to the store, mostly just to get the hell out of the house. It was brisk outside, close to zero degrees, and jazz played quietly on NPR as I got into my car. My wife and kids in bed, driving out of the neighborhood, I was struck by a horrible thought: Am I a bad father?

It might seem silly, absurd even, to spend the day with your kids and then ask yourself this question, but it was a genuine question that entered my mind. For a moment I was relieved to be away from my family, and in some ways I resented the fact that I’d done none of the things that I felt I needed to do in order to take care of them. I felt unproductive. And I wondered what that said about a man who, every morning prayed to whoever might be listening to help him be a terrific husband and father, but by and large spends his time away from home, working at a thousand and one different jobs, business endeavors, and hobbies.

I drove past the store, kept on driving, turned the radio down and put in some time just thinking about all this. And while I admit I’m still thinking about it, one of my conclusions was simply this:

My wife is where the bar is. When I think of parents, I never think of the bad ones. When I think of parents, I compare myself to my wife, and in that comparison I’ll always come in second place. I have some sort of undiagnosed ADD that makes me do a million things at once, and I typically get away with it for my relative talent and ability to be hyper-productive when need be. Sonja, on the other hand, is slow and steady, deliberate and deliberative, consistent, even-keeled, and steadfast. She is the parent who patiently waits for Zooey to finish feeding herself, and for Titus to climb three flights of stairs. She works hard, rarely complains, and is in so many other ways the best mother I’ve ever met. Furthermore, she has no serious interests to compete with being a parent. If she could just parent all day every day, she’d do that. Compared to her, I’ll always be the second place parent in this household, because that’s where the bar is. But maybe I don’t need to be first place. Maybe I can just be my best, and be grateful that my children have such a wonderful mother. I decided, as I drove, that this should be my approach. Gratitude, after all, costs nothing.

I got home and poured myself a glass of Cabernet, and then another. I have had both the 2014 and the 2015 Meadowcroft Napa Valley Cabernet Sauvignons on the kitchen counter for the past week, regularly taking pulls from them with my Coravin to pair them with various things I’m cooking, or sharing them with friends and wine industry friends. Both of them pair diversely, though as a native Sandhiller I will declare them steak wines first and foremost. Nevertheless, last night they paired quite nicely with some simple cheese and a bit of rapt contemplation. Like I said: diverse. 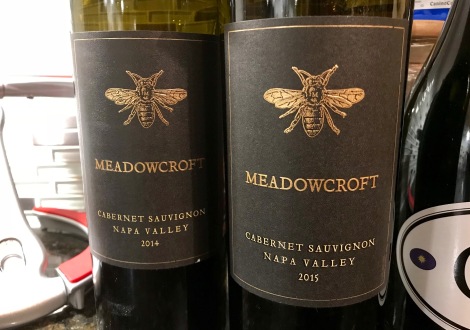 The 2014 is opulent in a beautiful way, with a robustness of character yet simultaneously an unmistakable elegance, a juxtaposition of traits that only Cabernet Sauvignon and, on occasion, Merlot can accomplish. Beautiful, classic Cabernet aromatics lead into a silky smooth wine with refined tannins; I get dark mountain berries, subtle cocoa, and oak-imparted toasty flavors. 14.5% ABV, it’s one of the easiest-drinking Cabernets I’ve had in a long time.  I shared it with a friend in the wine industry who immediately began to compare it to the best wines being made by Michael Trujillo, which is high praise indeed.  When I asked if he thought it reminded him of Burly at all — one of my personal favorites, his eyes widened in an emphatic yes. More than what this wine may be like, however, this wine is likable, and very much so. Love-able even. I highly recommend it as one of the best Napa Cabs I’ve had in a very long time.

The 2015 is the brooding little brother of the 2014, darker and chewier, yet no less elegant in nature. It keeps to itself a bit more on the nose; a pleasant bouquet, it remains a bit refined from start to finish. Dark and bold with well-integrated tannins that offer ample structure and tremendous balance, perhaps favoring fruit, it’s more imposing upon that palate than its big brother, but certainly no less enjoyable. Cocoa and cassis mingle quietly underneath dark purple and black fruits that come at the imbiber in seemingly tireless waves.  If I were to try to say something that made sense, (something devoted readers know I rarely feel obligated to do), I’d say that the 2015 is more reminiscent of Napa’s notorious mountain fruit districts — Mt. Veeder, Howell Mountain, Spring Mountain, while the 2014, at least in character, hails a bit closer to the Valley floor. Both wines are undeniably well-made, and while both are drinking beautifully right now, both are equally age-worthy; I’d imagine they’ll do quite well for a good decade and a half if not longer.

Two of the best Cabs I’ve had in a long time, this, too, is where the bar is. I reviewed 1,600 wines last year, and I suspect that these two would both be in the top 2% of those. There are an elite group of winemakers in Sonoma County (where Meadowcroft is located — this is Napa Valley fruit) that include Steve Noble Ledson, Mike Duffy, Tom Meadowcroft, and several others who are setting the bar higher and higher with every vintage.  If you, like me, enjoy Napa Cabs, then I can’t encourage you strongly enough to try these wines. Try them, and you’ll know where the bar is.

Tonight, a glass of excellent wine brought me back to reality, and reminded me as I sipped and relaxed that parenthood, like marriage, isn’t a competition. Somehow today, I managed to get my sick wife every glass of ice, gatorade, and tylenol she asked for, clothe, feed, and entertain two tiny children and, looking around, not only did I not burn the house down, but I’ll be damned if the dishes aren’t done as well. Not bad.

As I thought about my day, I though of feeding the kids pizza, of countless diapers, of Titus’s fits and Zooey’s yelling, of countless hugs and time spent playing in, by the end of the day, darn near every room in the house. I especially thought of Titus, Zooey, and I, all downstairs after eating our pizza together in the kitchen, watching the Eagles game on television. From the floor Zooey started to complain, so I reached down out of my big leather recliner and scooped her into my arms. Then Titus decided to climb into my lap, and promptly flipped himself around to see the television and put his head against my shoulder. And there I sat, with the two best kids in the whole damn world, one wrapped in each arm, just enjoying one another’s warmth and company with a football game on in the background. I closed my eyes. They may have too. It was perfect. In retrospect, it was the moment that made the whole day make sense, and while it lasted for only about ten minutes, I’ll certainly never forget it.

Cheers to the moments that make the tough days make sense, to the wine that helps us think through those days, and to knowing where the bar is,