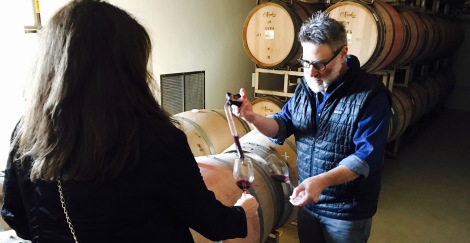 I’ve recently been giving some thought to barrel samples. (The moment I stopped typing that sentence, I realized how geeky this sounds, but I’ll stand by it.)  There’s actually quite a bit to consider. On one hand, barrel samples are incomplete products. They’re not what will ever be released to the public. Often, the whites lack the benefit of a filter; I recently tasted a few that were literally orange in color. Similarly, the reds have not yet reaped the full benefit of their time on oak. They are young, immature, an unfinished creation. I’m reminded of The Athenaeum, Gilbert Stuart’s famous portrait of President George Washington, which adorns the dollar bill, and which was never finished. 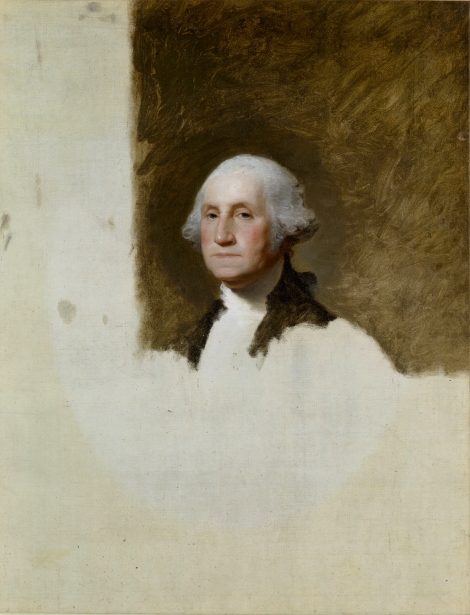 I recently had the opportunity to taste wines with Tim Dolven, a viticultural veteran and a Napa Valley insider who currently serves as the assistant winemaker to Peter Franus. A wealth of knowledge and an intriguing conversationalist, Tim and I were barrel tasting at eight in the morning, watching out the open doors of a massive tank room as the fog burnt slowly off the vineyards on the western side of the Valle floor. I’d barrel tasted before, of course, many times over the years, but something special happened with Tim that changed my entire perspective on the experience henceforward, and got me to thinking, and ultimately writing this post.

I had just sampled yet another beautiful young red blend that was sourced from the Brandlin Vineyard. It was the 2016, and it was largely Zinfandel, yet it tasted considerably different than the 2015 I had tasted from the barrel moments earlier. I might have attributed this to the additional twelve or so months spent on oak, but Tim walked over to another barrel, studied the head for a moment, pulled the plug and drew a tiny sample into his glass wine thief. He then returned to me and deposited the small amount of red wine from the thief into my glass, where it mixed instantly with the 2016 vintage I was already drinking. Unquestioning, I swirled and brought it to my lips; my face must have revealed what my mouth was experiencing, for the wine had changed completely with the addition of a few drops of whatever nectar had been placed therein. “Mourvedre,” Tim said simply, smiling slightly.  I will never cease to marvel at nor to appreciate the craft of the winemaker. 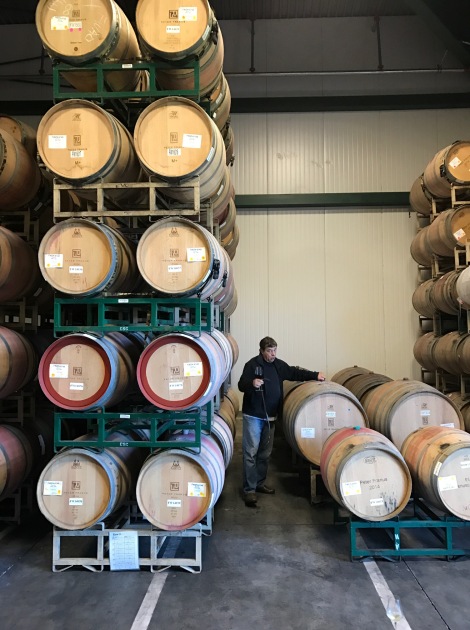 I’ve recently come to understand something: when a winemaker shares a barrel sample with you, it’s genuinely an intimate experience for them.  It’s far different than when a tour guide at a large production facility uses a thief to pour tastes for your tour, which happens frequently. (I don’t understand the point of that, though I assume it’s mostly showmanship.) But when a winemaker does it, extracting their own raw, unfinished work-in-progress from the barrel and releasing it into your glass, only to watch intently as you taste it seconds later, it is pure exposure, like waking up in the morning next to someone you’ve made love to but never seen naked in the light, never seen without their makeup or fancy evening clothes. “This isn’t the best of me,” it says, “but it’s as real as I get, and it’s all for you.”

If that sounds hyperbolic, then you clearly don’t love wine as I do. And if it sounds crass, well, then you need to get out more. Wine, like love making, is exceptionally intimate. I remember my friend, winemaker Jean Hoefliger, speaking passionately about the wines he makes, and the wines he drinks. “Ultimately,” Jean told me once, “wine is a mood.” He went on to say that drinking different wines was akin to “having great sex every night with a different woman.” Jean helped me to understand that wine is as intimate, personal, and beautiful as the one who made it. To taste it from the barrel is to glimpse with the mouth the pure potential of an artist, to savor a wine with the nose of hopefulness, the mouthfeel of wanting, and the body of a lifetime spent in labor.

Sonja and I recently shared an experience of this type of viticultural intimacy at Silverado Vineyards a week or two ago. We met and quickly fell in love with winemaker Jon Emmerich, who has made the wines for Silverado for 27 vintages now. We met and shook hands, and after a brief stop at a map of the property, we went straight past a set table and a spread of food into a mighty barrel room the size of a basketball court or larger. Jon, taking turns asking and answering questions, took us over to a barrel of Chardonnay and poured a sample for each of us. It was beautiful, raw, unfiltered, with Carneros fruit having undergone malo offering a primal citric presence that I hoped would remain on the finished product before transitioning into delicate buttery undertones. I loved the wine so much that I wanted to say “STOP!” and request that it be bottled immediately, but I knew that I had to trust the man who had been making wine at Silverado since I was eight years old.  It will turn out as he intends for it to, and I know that I will enjoy it. 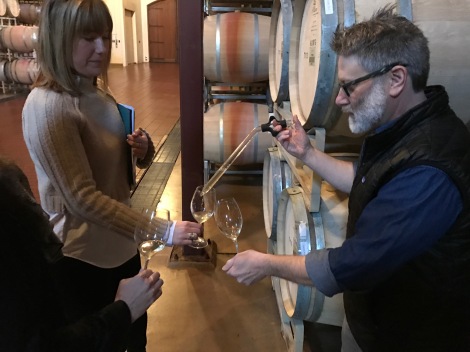 Jon Emmerich shares samples of his Chardonnay with Sonja and Amanda.

After the Chardonnay, we walked down a flight of metal stairs into another barrel room, where several barrels, maybe five or six, were lined up one after the other with nothing stacked atop them. I’d never seen this done before, but the purpose of the arrangement quickly became clear. Jon thieved us pour after pour of Cabernet grown in the Stag’s Leap district, first from a neutral oak barrel, then from one of new French oak, and later, from an American oak barrel, and then Hungarian. The same juice was in each, the same vintage and all, but you’d never have guessed it from the samples as each took on the characteristics imparted by the different woods they were exposed to. This in itself was interesting, but doing it with the man who was making the wine, getting to ask him questions about each one and simultaneously answering his questions about our preferences was, again, an act of intimacy, and more simply put, a truly wonderful experience, and a memory that Sonja and I will cherish always.

My friend Brian recently started making his own beer. “You should make your own wine,” he casually said to me one night. “I don’t think I truly appreciated beer until I started making it.” I informed him candidly that to make the sort of wine I enjoy costs thousands of dollars, and that I’d most likely screw it up anyway. But I can do the next best thing, I can taste the wine as it is being made with the artist who is creating it. I can watch her paint, feeling every stroke of the brush across my tongue as she goes along, crafting a masterpiece which I may, in my vanity, allow myself to believe is all for me.