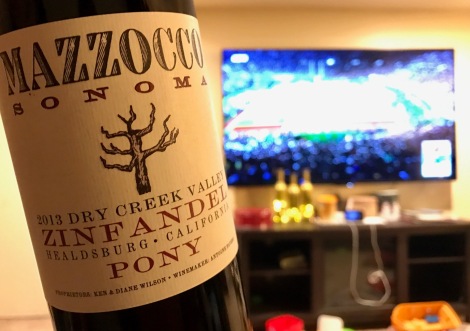 It’s a good thing for me that I work with incredibly thoughtful people. If I didn’t, I don’t think I’m thoughtful enough to make up for it. The world would probably come to an end. The people I teach, write, and work with on a daily basis have bailed me out more times than I can count, reminding me of meetings and appointments, when things need to be done, all of the day-to-day tedium that big-picture sorts and dreamers like me tend to lose sight of, by accident or otherwise.  Another one of the perks of working with thoughtful people is that they often give great gifts. My co-teacher is one such person, who not only keeps me on the straight and narrow and reminds me not to miss this meeting or that one, but also gives thoughtful presents. Right before break, she presented me with this wine, which she was clearly excited about.

“You’re going to like it,” she told me. I hate it when people say that. I feel as if it puts pressure on my to enjoy it, or else to lie. That said, she’s one of the more assertive, smarter people I know; she doesn’t typically make claims without a reason, and she drinks rarely if at all, so I deduced that she probably hadn’t had this wine herself. Instead, she’d probably done research, and given that I’m a fan of Sonoma and yet unfamiliar with this producer, I was certainly intrigued.

Last night, I cracked it open while a few friends, Sonja, and I watched part of a bowl game we didn’t care about before catching up on back episodes of “This Is Us,” which we care far too much about. Enough about television — this wine is terrific. Like I said, I hadn’t heard of Mazzocco until I was presented with this bottle, but now that I have I’m going to seek out more of their wine.  This is one of those Zins that does better after it opens up; what started as a lush, fruit-driven wine quickly began to exhibit prominent notes of milk chocolate, baking spice, and an herbaceous quality that was impossible not to enjoy. 97% Zinfandel with 3% Petite Sirah spliced in for good measure, this is one of the more enjoyable Zins I’ve had in a while. The balance and complexity of this wine made it something we all remarked upon, and paired beautifully with good company and our cheese plate.

The joy of discovery is a special thing, and I’m thankful to those, such as my generous and thoughtful co-teacher, who help me to experience and enjoy new things. If you haven’t already discovered it for yourself, I suggest you seek out Mazzocco’s Pony Zinfandel, 2013. I think you’ll be as impressed as I was.