By B8 yesterday, the snow was coming down in gusty flurries as, safe inside the school, my students and I watched Kenneth Branagh’s 1996 adaptation of Hamlet. “The funeral baked meats did coldly furnish forth the marriage tables,” Hamlet tells Horatio, a shady remark to remind all listening that his mother waited less than a month to marry his uncle upon his father’s death. After we dissected the line, my students got a kick out of it. “You don’t have to get everything,” I encourage them. “I get paid to teach you this stuff and I don’t get half of it.”  Shakespeare is complex, but he’s an enjoyable puzzle to work through, a work of art in the English language.

By the time we finished, I told them to get home safely. After grabbing a few of my own items, I was brushing the snow off of my car and heading out of the lot. Once home, I needed to change my car out for the one with kid seats in it, then go get the kids. My usual ten-minute commute to the house took thirty, as I an others spun our wheels on the slightest of hills. I took side streets to avoid accidents and stalled out cars that I could see in front of me, and by the time I got home I felt fatigued by the stress. Once in the CRV, which handled some better, I struck back out into the flurries of snow and icy roads. Of course, not everyone got into a small SUV when I did. The streets were packed with stuck drivers and accidents. It took forty minutes to get to daycare, another typical ten-minute drive. We called Grandma and Grandpa on the way home to occupy the kids.

Sonja is on a really impressive health kick, and it’s no flash in the pan. She’s been really into spin for six months now, maybe more, in addition to her exercise classes at the gym and running. I passed her this morning in our room and she asked me “Who have I become? It’s 6:30AM on a Saturday and I’m awake to workout.”  I smiled. Part of her health kick is “dry January” — not drinking in January. On January 1, shortly after perhaps a little overindulgence, it sounded like a fine idea to me. For a few days it was a nice exercise in self restraint, but this cold weather begs for red wine. Last night, after nearly two hours of driving on awful roads and just barely avoiding getting stuck or worse, I walked in and informed my beautiful wife that I was officially done with Dry January, and I opened the bets bottle of wine I had on the rack in the kitchen.

I met Brennon Leighton at Taste of Washington a few years ago. Tattooed, stout, articulate, he’s extremely likeable and equally talented. His wines are phenomenal, and I was eager to get into this one. The 2013 B. Leighton Petit Verdot from the Olsen Brothers Vineyard in Washington’s Yakima Valley is a work of art. After ten days on hiatus, the powerful aromatics of the bouquet were so satisfying that I could have smelled it all night without ever taking a sip — everything from black and blue fruits to lavender came traipsing out of the bottle upon the removal of the cork. 100% varietal, it spends 22 months on 50% new oak, and weighs in at a food-friendly 13.5% ABV.  Long maceration and extended time on the lees, plus no filtering, it’s a unique wine and a beautiful expression of the varietal. Robert Parker gave it 95 points, and I say he got that right. If you see this one — or any other wine of Brennon’s, be sure to try it. 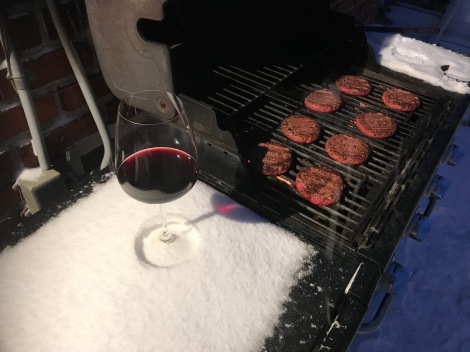 After  a glass of wine and some conversation with Sonja, I was ready to step out into the blizzard and make dinner — but not without my wine. To be honest, having a glass of wine with me while I cook feels like almost a necessity, and I remember Dave Phinney telling me once that he almost never eats a meal without wine. I get that. It’s not about being intoxicated, it’s about enjoying a work of art. I tossed the burgers on the grill and enjoyed the feel of heavy snowflakes on my exposed neck. I had made it to Friday. I had made it home alive, with my kids happy and intact. The weekend loomed large and full of promise. There was a lot to celebrate, and a beautiful glass of wine was the perfect thing to do it with.

To all those out there who might be observing a dry month, or perhaps find themselves fasting for other reasons, God bless you. There’s no reason not to do it and plenty of benefit, though as a friend reminded me just yesterday, the great Mark Twain taught us: “All things in moderation, including moderation.”  My fast has concluded. I’m looking forward to our dinner party tonight. Have a terrific weekend!