Most of the folks I’ve known who weren’t very good at determining which hills are worth dying on are now dead. This is, in most cases though not all, only metaphorical of course, but the point is that we have to make concessions in life. When Sonja and I first started dating almost six years ago, she mentioned that she wasn’t a fan of the hair that I was, at that time, growing out. In an effort to woo her, I cut it off, and this along with other things pleased her enough that not long after we were engaged, and later married.

Fast forward several years, and we have two children, a new house, jobs we enjoy, and a comfortable life. In that comfort, I had allowed myself to look the way I’d like to look, which in a word might be described as “hairy”. I don’t like cutting my hair. I like the way long hair looks and I like how easy it is to maintain. I like that long hair doesn’t have a cowlick, and, in candor, I like looking a little gruff. I also like paying zero dollars for haircuts and razor blades. Beards are also a great way to hide facial expressions, which is useful for someone like me whose face is quick to let you know when I think that you’re an idiot. Anyway, in my comfort, I had come to look like this, and I liked it:

Sonja, on the other hand, did not like it, and she had made this known. I tried not to care, tried to brush off the comments, but I suppose the truth is that it really does matter if your spouse likes the way you look. I can imagine things Sonja might do to her appearance that I would really struggle to appreciate, and as we both approach middle age and remain settled into our comfortable lives, I decided I need to work harder at making her feel appreciated. The hair thing really bothered her and, in the end, this was an act of service that I could do for her that I knew she’d really appreciate.  I called my friend Sarah, a great hairdresser, and though she was surprised by my request, she fit me in. Looking outside at my old Jeep Wrangler, which Sonja allows me to park in the garage during the summer and would love for me to sell, I knew there were hills I had successfully defended in our marriage. I wasn’t about to die on mount hair. 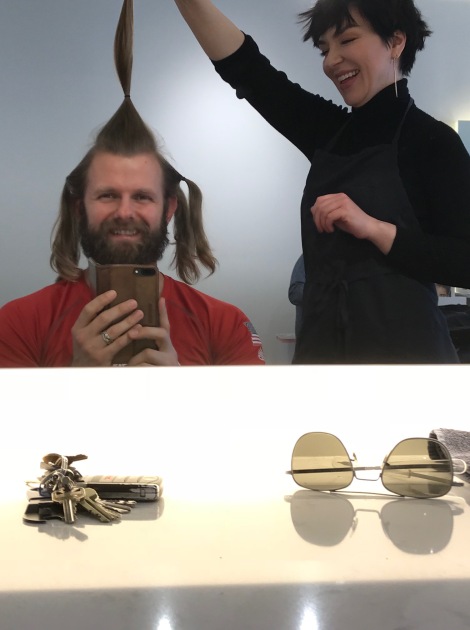 I took along with me a bottle of one of my very favorite wines, a 2014 Robledo Merlot from the Carneros region of the Napa Valley. I had recently been tasting this wine and am excited that soon I’ll be introducing it to the state of Nebraska, but today it was just to keep me sane and focused. Sonja and I visited the Robledo Winery on our honeymoon five years ago, and we fell in love not only with the wines but with the people and the place as well. It’s a bottle full of memories, and it seemed to me that wine this sentimental might be just the thing to remind me why I was in that chair, should I get the urge to skee-daddle.

Robust and dark, yet with the undeniable elegance I always expect from this varietal, rarely sourced from Carneros by comparison with, for example Pinot Noir or Chardonnay, the fragrant nose is enough to stop the show by itself. Upon the palate, luscious dark fruits, hints of woodsmoke, possibly a touch of cinnamon, and all supported with ample yet unimposing tannins that lend firm structure. The wine goes on and on, concluding with a lingering dry finish, and was enough to keep me distracted during the entire haircutting process. 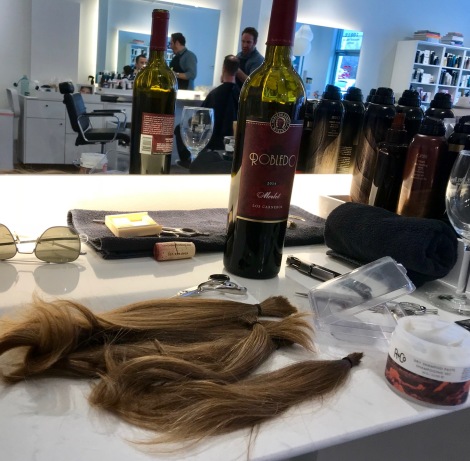 One fun aspect of the endeavor was that, at my request, Sara, my friend and hairdresser, had found an organization where we could donate my hair. “Children With Hair Loss” (https://childrenwithhairloss.us) isn’t a terribly creative name, but it seems like a good organization. And at 36, feeling self-conscious about cutting off my hair, well, I remember how hard it was at times being a child. I do hope that my hair can bring comfort to a little kid somewhere. That alone would make this worth it, to say nothing of my wife’s happiness.

“You look like a sad puppy,” Sarah told me, as she finished up with the haircut. “I feel like one,” I responded, thinking about my shaved dog back home and trying to avoid looking at myself in the mirror. “This is quite a transformation!” the man at the front of the shop ejaculated through a smile as he ran my credit card. I don’t know exactly what look I gave him, but I know he seemed less talkative after that. I’ll have to get used to not having my beard.  I returned home and was greeted in the kitchen by my wife. She hugged me and said something to the effect of “You look hot,” but I wasn’t really listening. I went off downstairs to sulk in my man cave and poured myself a drink. I wanted to go somewhere without a draft, as I discovered I could now feel every tiny gust of wind against my head. I felt naked. 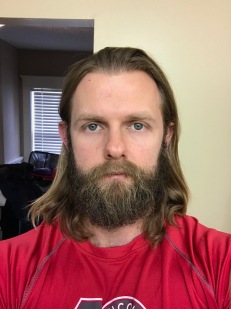 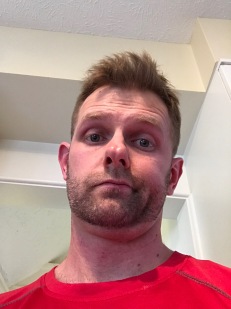 When I got done pouting, Sonja and I had a good talk on the couch. She loves the new haircut and that was the entire purpose. Sipping at a glass of Robledo Sauv Blanc later on, I remembered our honeymoon, and my first haircut attempt to woo her, which had worked. I know that five years into our marriage, those sorts of efforts are far less frequent, but no less important. It will take some getting used to, and it will probably be quite a while before I can see myself in the mirror without mumbling “whtthfckdido” through clenched teeth, but I’ll get there. And in the meantime, it’s fun to see Sonja’s face light up every time she sees me. Now, if you’ll excuse me, I need to reach out to a tattoo artist about sleeving my arm.

Cheers to the sacrifices we make for our spouses,