A lot of great things happened yesterday, the day after parent-teacher conferences, from meeting up with a few teachers I rarely see to feeling as if I’m finally on top of my teaching game and have things under control, to taking eight students, my student teacher, and my dear friend Carl out to lunch at 11’Worth Cafe. It was a really terrific day, but all of that was overshadowed some by the eager anticipation that Sonja and I were heading out of town that afternoon to celebrate our five year anniversary. I’d always expected we’d do that in Sonoma, if not in Champagne, but, well… life, and when my parents arrived to watch the kids, Sonja and I threw our bags in the car and took off for nearby Nebraska City and the Lied Lodge for the weekend. C’est la vie.

We got to Nebraska City, a bit of a misnomer for the quaint little tree-enshrouded hamlet, and went straight to the lodge. After we checked in and dropped off our bags, we went straight to the wine tasting in the lobby, somewhat like our honeymoon in Sonoma in that regard, and sat on the nice leather sofas, chatting and sipping at wine. When finished, we went back to the room to tidy up (I needed to remove my sweatshirt and running shoes) and then returned for dinner at the Lied Lodge’s restaurant. Once there, I favored a 23 ounce craft beer over their weak wine list, and after eyeballing the salads ordered a burger with an egg on top of it. So much for my diet. The beer battered french fries were great, though.

After dinner, back in the room, Sonja produced the replica of our wedding cake she’d had made for us this week. I’ll let her tell you more about that part here:

We may need to use the term replica loosely here since as you can see, the cake didn’t really turn out the same. Lesson learned, don’t take the baker’s word that they will remember your cake and send a picture. On our wedding day, as most experience I suppose, I only had one bite of cake. I was determined to rectify that on our anniversary and make use of the cake serving set that had only been used once. In the end, the cake was dry and crumbly and not what I expected, but it was fun none the less. I had told Mark days earlier to bring a sparkling wine to pair with chocolate since the cake was a surprise, and he did just that. 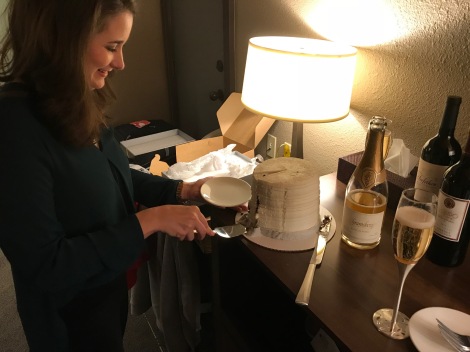 We paired the cake with a Schramsberg Blanc de Noirs 2013 — the same vintage as our marriage. Sonja and I visited Schramsberg and are huge fans of their story as well as their terrific wines. I’d been saving this bottle for a special occasion. Endless streams of tiny bubbles cascade upward through the light amber colored liquid. Notes of toffee, baked apple, and fresh baked bread make it almost indistinguishable from Champagne, and one of the best domestic sparkling wines I’ve ever had. We drank it from the flutes we toasted with on our wedding day, thoughtfully provided by Sonja for this occasion.

By 9:30, we were ready to crash. I don’t remember that being the case on our honeymoon five years ago, but again, I suppose, such is life. I’ll stop myself here, to let Sonja conclude our story:

It’s true, by 9:30 we were done for the day and headed to bed. My sleeping in plans the next morning were foiled as well by a body too used to being woken by tiny humans demanding attention in the morning. I don’t know if I could have imaged our life as it is today 5 years ago, though I couldn’t ask for anything more.

Cheers to anniversaries, ours and yours,

2 responses to ““Anniversary Weekend, Part I””