A few years ago, Mark gave a talk at a seminar in Budapest, Hungary, an opportunity for which he was grateful as it afforded him an extra day to traipse about and take in the storied city – which he soon learned was actually two cities, those of Buda and Pest. On one side of the blue Danube, the rolling hills of Buda boast gondolas to the top of vast bluffs overlooking the metropolis, and atop one of those mounts is the famous Palace of the Hapsburgs, which today boasts more than one excellent museum, a tribute to the history and future of the Hungarian people. On the other side, in Pest, the comparatively flat terrain is home to the old city square, many a market, and the Országház, (pronounced ”orsa-goz”), the magnificent Hungarian Parliament building. Joining these great brother and sister are bridge after bridge after bridge, many of which are as stunning in their form as they are vital in their function. In a few short days, Mark came to admire Budapest. And while he hopes that someday soon another opportunity to speak there may arise, for tonight, he’ll share the experience with Sonja by looking at a few of the pictures he took on his short stay there as together they explore Egri Bikaver, a wine better known to those who drink it as “Bull’s blood.”

Legend has it, at least the legend that was bestowed upon us at the wine shop where we purchased our bottle of Egri Bikaver, that the Hungarian vintners would blend the blood of bulls into the wine to give it color and backbone. Eger is a wine region in Hungary where the Bikavaer, the blood of bulls, is produced. Others have suggested the name is merely an observation derived from the deep color and full body of the wine itself. Still others have further romanticized the tale, sharing notions that the name dates back to the invasion of the Ottoman Sultan, Suleiman the Magnificent, in 1552, whereupon during the Siege of Eger Castle, soldiers were given the drink – some say containing the blood of bulls – to strengthen and hearten them during the long battle. After weeks and weeks, Eger refused to fall, and the Ottomans withdrew, beaten and humiliated. Yet whichever, if any, of the legends proves true, the bull’s blood of Eger may be almost as legendary as the nation itself. 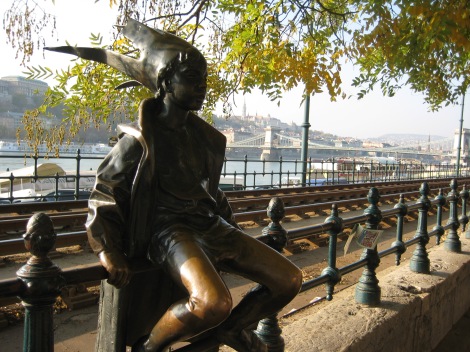 Traditionally made in part with Kadarka grapes, a varietal that is indigenous to Hungary and which possesses a robust character yet is fragile, susceptible to disease, and difficult to grow, Bikaver is a blend that is under the auspices of government legislation in Hungary. According to an article in Wine Spectator: “Hungarian law requires Bull’s Blood to be made from at least three of the red grape varieties that the country has approved for commercial wine production. Most producers use a significant amount of KHkfrankos (known as Lemberger in the United States or as Blaufr nkisch in Austria), because its sturdy character, blackberry flavor and acidity provide backbone. Also used are international varieties such as Cabernet Sauvignon, Cabernet Franc and Merlot.” 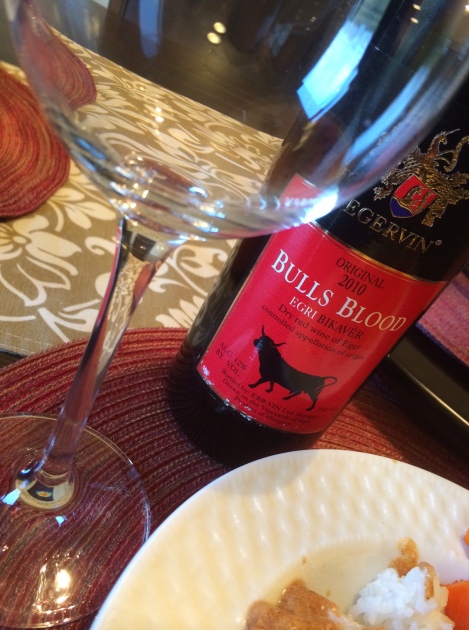 Though goulash is, of course, a more traditional Hungarian dish, the thick, doughy dumplings found in Hungarian versions putting to shame the flimsy egg noodles found in the cafeteria goulash of our youth, we paired our bull’s blood tonight with Sonja’s homemade Chicken Tikka Masala, a favorite of Mark’s with enough pizzazz and oomph to compliment even a Schott Zwiesel full of, well… blood.

Sonja thought the wine was familiar, but couldn’t quite place it. The flavor, we agreed, though enjoyable was somewhat non-descript. It is not a robust wine, as the name might imply, but is light on the tongue and tannic enough to leave the mouth feeling dry at the conclusion of a short finish. Mark felt as if he might be detecting plums, or other light-bodied, dark-colored fruits in the wine itself, and we agree that there is a spice to it, though we couldn’t place that either. The color is deep, dark, and Sonja likened it to port wines, though at 12% it’s far from fortified. It is said that the quality of Bikaver varies greatly from wine to wine, and from vintage to vintage. This particular vintage was well-rated on Vivino, but had only been listed once previously. In spite of all of this uncertainty, however, our overall take on the wine was rather positive. It is an easy drinking red that paired well with semi-spicy Indian food, but would also pair well with a variety of dishes, and is well-suited for the coming spring and summer months. 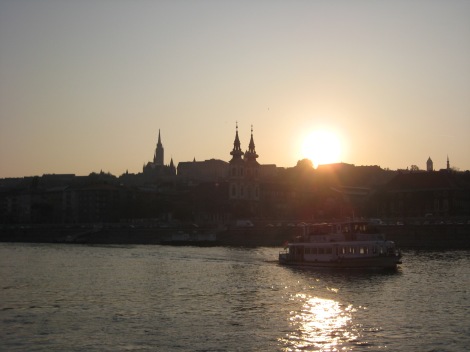 In candor we might confess that we chose this Hungarian wine only upon not being able to find a more exotic offering to taste and, ultimately, to write about. It was only after hearing the story about the use of literal blood to enrich the wine that we decided to give it a go, though we’re so thankful that we did. This brief excursion into Hungary reminded us of just how much we enjoy traveling, relish learning, and how rich and complex every culture in every nation truly is. This series gives us the opportunity to learn about other societies through wine – Mark learned none of this, save for the bits about Budapest, while there. The research we did tonight while sharing this wine not only made the wine more interesting, but opened our eyes to history and a society that we do not give much thought to in our daily lives, and it was a wonderful experience. Our next country? Who could say? We’ll just have to see what’s in stock when we return to the shop to purchase more bull’s blood.

For further reading, check out the article we referenced from Wine Spectator, dated November 25, 2000: http://stpdf.winespectator.com/webfeature/show/id/The-Revival-of-Hungarys-Bulls-Blood_20860