The 16th of February, in just a couple days, will be is our anniversary; Sonja and I were married on this weekend seven years ago. It’s interesting what a small percentage of my life that seems to be, and yet how profoundly things evolve over such a period of time. For one thing, the wine we drank seven years ago, before visiting Napa and Sonoma on our honeymoon, was very different (and not nearly as delightful) from the wine we drink now. We lived in a different house, drove different cars, had different jobs — we were different people. But perhaps the biggest change comes in the form of our amazing children.

Sonja has been away on business all week, so I settled into the role of a single parent, a role made far easier by the knowledge that the position is temporary. Whenever this happens, I find myself marveling that there are people who can and do parent entirely by themselves all across the world. I’m not sure how they pull it off, but as I’ve said in the past, they have my respect and admiration. While Sonja was away, Zooey got sick, so yesterday I had to miss Parent-Teacher Conferences to get her from daycare and bring her home.  By the time Sonja was back in Omaha last night, I was fairly exhausted from the week, though in some ways feeling like super dad in that both of my offspring were still alive and happy. Sonja found us in the family room, watching The Lion King, singing along to “Hakuna Matata” when she arrived home. The kids were elated to see her.

After a short reunion I went upstairs to make dinner while Sonja spent time reconnecting with the children.  This week I’ve been too busy even to have a beer in the evenings, so last night I told Alexa to play Rachmaninoff and opened a bottle of wine to sip at while I cooked, with the intent of Sonja and I pairing it with dinner and sharing the rest of it after the kids went to bed. As I prepped the kitchen, I pulled the cork and enjoyed my first few sips of this bottle of Tamber Bey “Rabicano” a great deal. Sonja and I have visited this winery in the past, in the northern end of the Napa Valley. We know and very much like the proprietors, Barry and Jennifer Waitte, and they make exceptional wines. The 2017 Rabicano is a blend of 75% Cabernet Sauvignon, 19% Merlot, 5% Petit Verdot, and 1% Cabernet Franc, all sourced from a single vineyard: Deux Chevaux.  The wine has a formidable structure with grippy tannins, and is deep purple, dark, and reminiscent of mountain fruit. I always prefer Cabernet Sauvignon, the savage grape, to be balanced out with a bit of Merlot; this blend is proportionally reminiscent of Warren Winiarski’s 1973 Cab Sauv that won the Judgement of Paris in 1976, though with the addition of other Bordeaux varietals. The 2017 Rabicano is satisfying from nose to finish, with a beautiful dark fruit profile that pops in places with subtle hints of vibrant blueberry and expressive floral notes. Balanced, elegant, incredibly well made, this could easily become one of my favorite wines of the year. 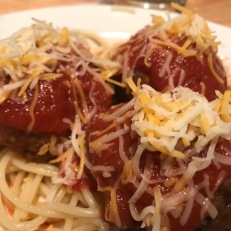 For dinner, I made meatballs, and we huddled around the kitchen island as a family. The kids enjoyed them, though at one point Titus had one of the oversized meatballs in his four-year-old fist and was eating it like an apple. “Big boys use their fork,” I reminded him, and to my delight he picked up his fork, defiantly stabbed his meatball in the heart, and took a large chomp of it while eyeballing me as if to say “You’ve ruined my fun — happy now?” Putting the children to bed last night was so much easier with Sonja’s help.  After seven years and so many changes, having a partner to support me in the day-to-day and routine things is perhaps one of the biggest points of gratitude in my life.

Once we put the kids to bed, I decanted the wine and we sat in front of the fireplace and talked. In the two hours since I had opened the wine, and with the aid of a decanter, it became smoother and still more expressive. And in the nearly seven-years since we got married, Sonja and I have started to figure a few things out as well. Sitting in front of the fire last night, we spent time withe one another and caught up on our hectic weeks. She’s become a spin enthusiast, and rode two different Pelotons on her business trip which she told me about. We shared a lot of ideas, including our stressors and those things that are hard for us right now, and it was beautiful to have the time together to talk after a long hiatus.  She told me about the book she just finished reading, asked me about the one I’m currently working on, and we spoke of our families. The conversation continued long after the wine was gone.

We might have been different people seven years ago, but I’m confident in saying we’re better people now, and we’re better together, too. This weekend, as we celebrate our marriage, I’ll be spending much of my time reflecting upon how grateful I am for how things have turned out, for my beautiful, patient, loving wife, and for the children we’ve had together. I hope your weekends start off just as wonderfully, and with a healthy dose of gratitude. Happy Valentine’s Day, and happy Friday, to you all!