My vision for the wine cellar has always surpassed mere storage. At this point, the capacity of the cellar exceeds what we can consume by a great deal, though it gives us options as well as storage for what comes in so that wine isn’t just laying around the kitchen or crammed into a corner behind a couch as it once was. One thing that has been important to me from the beginning was that Sonja actually needed to like the cellar. It’s physically a part of our house; I don’t want it to be my cellar — I want it to be ours, even if I am the one with the red obsession.

Part of making it ours was making it a place we could spend time together. Some of my efforts at temperature control were related in part to that notion, and of course I’ve tried to make it aesthetically pleasing. That said, standing around for a long time on a concrete floor isn’t Sonja’s or my version of comfortable. It quickly became clear we needed to install some seating and a place to host others in that space.

The notion of adding seating in our cellar at once presented a logistical problem. This is a storage room that I’ve converted, and it has an identical footprint to our front porch: more than thirty feet long, less than ten feet wide. I had all kinds of ideas about how to install a place to seat people, including using an old door (it was too wide) and building a table that would lower from the ceiling on cables (the name is Bond).  I toyed with the idea of banding two kitchen islands together, but then started looking a bit harder and, ultimately, tracked down a long, thin table I liked on Overstock.com.  Important to the table is that the stools fit underneath so it does not impede the ability to walk in the cellar if you’re just snagging a bottle.

If you’ll permit me for being a little tangential, free shipping is a bizarre concept. I know it’s meant to entice buyers, and I know it works on me, but I also know that shipping a ton of stuff across the country takes labor, gasoline, packaging, and much more. One day, Sonja sent me a text that was only a picture, no caption. “That’s too many shoes!” I responded. Sonja later regaled me with stories of a grumpy delivery man.

Soon after, I lugged the boxes downstairs into the cellar, and Sonja very kindly agreed to help me assemble our new table one Saturday during the kids’ nap time. She’s far better at that stuff than I am, and I was grateful for her help. We unpacked, and Sonja started on the stools while I continued cutting open boxes and lugging tons and tons of packaging out the door. We moved them into the carpeted family room so as not to scratch them on the bare cellar floor.  I got to work on the table, which required surprising amounts of assembly for, you know, a table. It was pleasant working side by side. 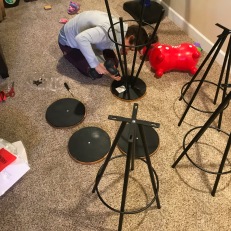 We got the stools and table built fairly quickly, thanks to Sonja’s patience and expertise in stool assembly. In all, we were pleased with how it looked, and I was excited to see it in the cellar. Cautiously, we got on either side of the heavy wooden table and began to lift.  Sonja and I have lugged exercise bikes up flights of stairs in this house, cut bed springs in half (with my dad’s help) to get them around corners, and crammed sofas into unlikely stairwells in the basement. This was nothing… 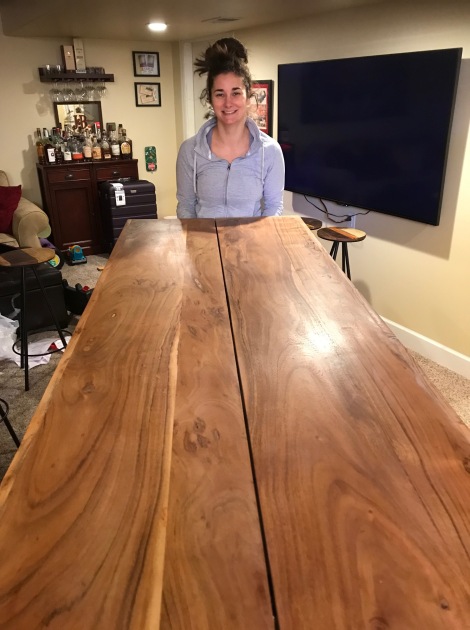 …until. Oops. I had forgotten just how narrow the cellar door was. This fact was complicated by the reality that I had shrunk the size of an already narrow room a full foot by building a rack of wine on one wall.  Why hadn’t we just built the stupid table in the stupid cellar?

Eventually — and without grumbling at one another I might add, Sonja and I engaged in and ultimately won a game of real-world Tetris, twisting the table around the corner without taking the door off its hinges or any wine off the racks. Teamwork makes the dream work! 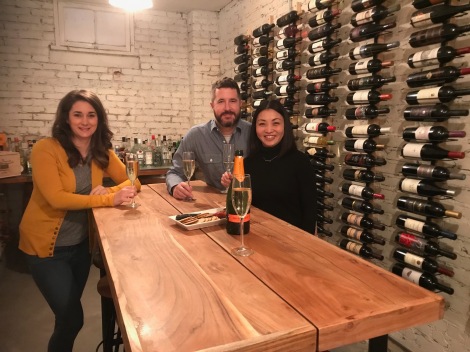 At last, our cellar had seating in it! We celebrated by inviting our friends Mark and Meg down into the cellar for the first course at dinner that night. It proved to be a genuinely comfortable place to spend the time, and in truth we might have served the entire dinner in there were it not for the distance between the kitchen and the cellar.  I suspect we’ll be using the cellar to entertain more in the future. Maybe you can stop by and join us for a glass of wine sometime? We hope so.  Enjoy the rest of your weekend, friends! 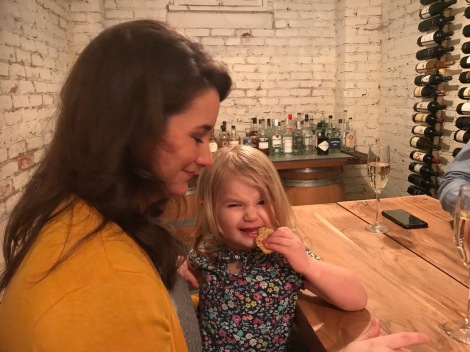