What a day it has been! I did more today in ten hours than I do in most days during the entire eighteen or so that I’m awake. Among the highlights include drinking amazing coffee in a place that takes coffee so seriously that there isn’t a Starbucks in the entire country, visiting the War Childhood Museum — easily one of the most impressive museums I’ve ever been to, viewing the tunnels that the Bosnians used to keep Sarajevo alive during the siege in the mid-90’s, and walking through the Jewish cemetery of Sarajevo, the second largest Jewish cemetery in all of Europe. There was a lot more done today, believe me, but I want to try to stay focused. I’ll elaborate on a few of these things below, and the rest we’ll just have to chat about in person.

As I mentioned in yesterday’s post, traveling is an amazing learning experience, always, and there’s nothing quite like being in a new place. One of the things that caught me quite off guard today, however, was that very, very few businesses in Sarajevo will accept a credit card. It’s a cash-only society, which would work fine if I hadn’t used my ATM card thrice this morning, pulling out enough cash to settle a rather large debt with a creditor here in Sarajevo. So, with very little cash available, I suddenly found my dining and other options much more limited because, as I already stated, virtually nobody was willing to accept a credit card. Live and learn, I suppose. Hunger is a good teacher.

Below, I’m going to share some of today’s highlights with you in only images. I hope you find it effective. Talk to you more in a minute… 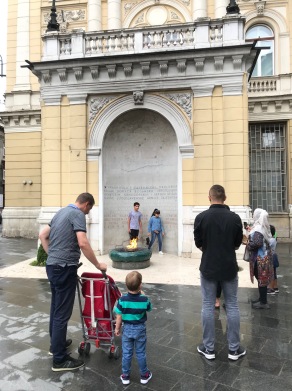 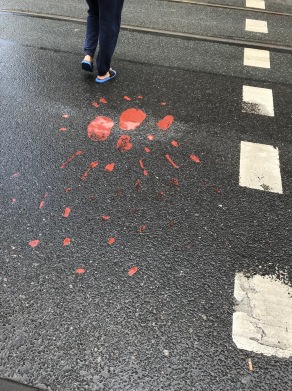 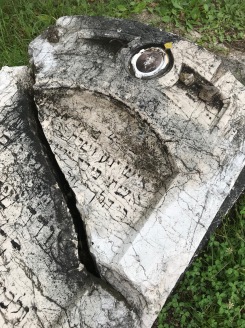 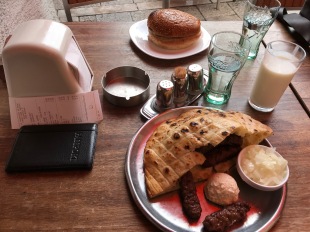 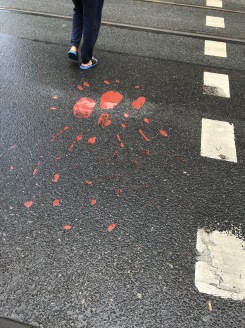 So, in essence, there were some highlights, some amazing highlights, some lessons learned, some concepts taken in. Like I said, I’d love to share them with you in greater detail in person sometime, and if we’re doing that then we should do it over a glass of Bosnian wine. I found one that I like quite a bit today (please pardon the clutter of my makeshift workspace). 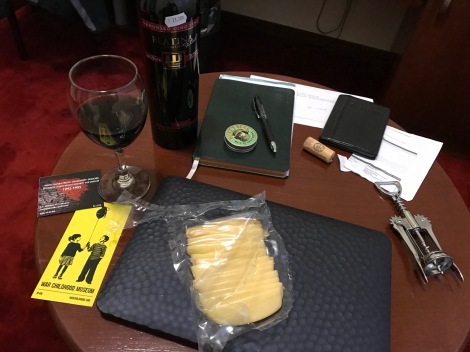 Blatina Vrhunsko Suho 2015 impresses me. I walked into a convenience store because I suspected they could take my credit card, and for fourteen Bosnian Marks, around eight or nine dollars or so, I walked out with a bottle of red wine and some cheese — not bad at all. The cashier, who looked like she was a combination of tired and angry about something, gave me no options when I asked for Bosnian wine, but just grabbed this bottle, set it on the country, snatched my cheese out of my hand and asked “bag?” to which I responded “sure” and attempted a smile. The cheese is excellent but the wine is truly something different. A little sweet, but not too much so, it has an elegant, rich nose of dark cherry and vanilla, and follows it up with an elegantly structured body of blueberry, blackberry, silky chocolate, dark cherry, and hints of cassis. I’d guess it has had some oak exposure, but not much, and is probably best consumed within a decade or less of birth. Still, for $7 a bottle, I can think of few wines in the US that would compete. Bogle maybe, but those are more like $9-$10. At 13% ABV, this easy drinker is killer food wine, and I’d definitely buy it back home if I could.

I went out again later tonight, hit up a local bar with a Visa sign in the window, one of the few, and there met a fellow genocide scholar with whom I watched the Coratia v. Russia match until the live music got so loud that could no longer converse. It was great to have someone to bounce ideas off of, and Croatia, the “neighbor” my colleague kept referring to, won on penalty kicks, leaving Belgium, whom I’m invested in, Croatia, whom I’m invested in, England, whom I’m very invested in, and some other team I can’t name in the finals. Not a bad World Cup given the US didn’t qualify, eh?

I got back to my hotel and was informed that my luggage has yet to arrive. That’s not good news but, well, no matter. It’s time to go to bed here in Sarajevo; I have a big day tomorrow. Thank you for reading, and do look into Bosnian wine. I’ve had one that I remember, and it was terrific!

Cheers to trying new things, to traveling, and to… you know… eating cheese in your hotel room in a ripe pair of three-day-old boxer shorts,