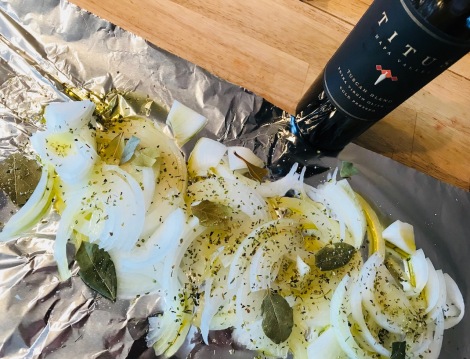 My run yesterday was ugly, and that’s an understatement. Sonja had errands to run, so I took both kids on my jog in the BOB, a stroller designed for off-roading, and headed out. I felt good at first, the cloud cover masking the sun and the humidity familiar. I thought originally I’d go out for six, but when I hit three and the point at which I would have turned around, I kept going. The same thing happened at four. At five, however, I started to feel it. A combination of heat and humidity and hills. I had run a hill workout at Silverado Vineyards early on Saturday morning, their steep and winding hills being perfect if equally brutal. By mile six of my run yesterday, I was beat, and started to stop for water and rests, which I rarely do. By mile eight, the BOB bouncing up and down underneath the weight of my arms as I attempted to lean on it for support, I was done, and at eight and a half I decided to walk the last mile and a half home.  As the run ground down I started talking to the kids.

“Titus, Zooey,” I told them, as they sat facing forward in the stroller. “You have to be good to one another. You have to love one another and look out for one another all the time, okay? Mommy and I love you, but we won’t always be here,” (my own death was probably on my mind given the way I was feeling in that moment). I wasn’t attempting to be morose, but your children’s future is something that you can’t very well not think about. I think about it constantly.

Titus. People always ask me if he’s named for the winery on the Silverado Trail, which is in turn named for the brothers who founded it. He isn’t. He was named on Sonja and my second or third date, in casual conversation that went something like this:

“If we ever have kids, we’ll have to name the first boy Titus.”

Picture a doe-eyed Sonja and my attempt at a Rico Suave version of myself and you’ll get a sense of how silly it all was, but the name stuck, and when we found out we were having a boy there wasn’t much debate. And whether he’s named for the winery or not (I swear, he isn’t) he nevertheless shares his name with a pretty amazing place. I visited Titus Vineyards again on my last trip to Napa, and it was, as usual, a great experience.

Walking in the door, I was immediately greeted by Mike, one of the gentlest souls in all the Valley, a terrific person and an excellent host. I’ve known Mike for a few years now, since I reviewed the winery for American Winery Guide, and have always like him. Though I hadn’t seen him in about a thousand days, he greeted me like and old friend, and we immediately started catching up on one another’s lives. After a spell, Danielle joined us, and after that Eric Titus. Eric and I sat out on the patio overlooking the vineyard with a glass of Sauvignon Blanc and chatted for a while. People make a winery what it is, and the people at Titus make it a special place to visit. The wine, of course, is also incredible. I could spend most of my afternoons there and be happy.

We had our neighbors and friends, Baron and Travis over for dinner last night. They are new dads, their daughter just having turned one last month, and so we celebrated with a special dinner. I made onions for the steak using bay leaves, oregano, sea salt, and Titus olive oil that I brought back from the vineyard. I paired the steaks with my last bottle of Titus Cabernet Sauvignon, vintage 1997, which is drinking beautifully, and we finished off the night with Cards Against Humanity paired with Titus Sauvignon Blanc. Though Titus slumbered in his crib above us, he was nevertheless with us in both name and spirit. 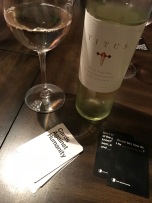 The kids and I got home from my ugly ten miler twenty minutes after they were supposed to be down for their nap. Sonja took it in stride. She had sandwiches and fresh strawberries waiting for us, and after I slammed an entire gatorade, I slouched down on a stool and ate lunch with them. Little Zooey, now one, kept glancing over at me with concern. Having an understanding family is a great thing.

There’s this picture of me in my early twenties — I haven’t seen it in years, and it may not even exist anymore, but I remember it vividly. I’m at a high school classmate’s wedding reception, and during the ritualistic “garter toss” I, along with my best man Tylr, am standing about ten feet behind a crowd of young gentleman who are diving for the thrown lingerie, the superstition being that if one of us catches it, that person is destined to be the next to get married. My hands are in my pockets, and Tylr is holding a beer. I didn’t always know I wanted kids, and I wasn’t even sure I wanted to get married. But now I can’t imagine anything else, nor do I wish to. Titus and Zooey and Sonja are the single most important factor in every decision I make, and their smiles, laughter, happiness, and tears are my reason for… well… for everything, so much so that I realized yesterday that even father’s day, a day for dads, is really about the kids that make a man a father. It’s a funny world, a hell of a world, and I love living in it.

Cheers to our kids, and to this funny world,

As an update for those who are sponsoring the XC team through the miles I run, I am now at 69 miles for the summer, including yesterday’s ugly ten. Sponsored at $4.67/mile currently, that brings my total to $322.23. Thanks for your support!