Lately, I’ve been getting heartburn. At lunch on Saturday, I made peppers and spicy Italian sausages and paired it with a crisp, acidic Chardonnay. It was difficult to know what was giving me heartburn, given the options, but something kicked my butt that afternoon and I ended up having to lie down. And yet, for Sunday’s lunch of leftovers, I had more of the same food, accompanied by more of the same heartburn, though both in lesser quantity.

I’m terrible at diets. I once spent over a year counting calories and documenting them on my phone. I lost a few percent body fat… and my mind. Since then, I work out religiously, and I eat and drink what I want. I’m what my friend Mike calls “daddy fit”, which apparently means I look like a dad who has time to exercise despite increasingly lesser contributions from metabolism. I’ll take it.

Yesterday, driving home from church, I asked Sonja if she’d prefer macaroni and cheese or Pad Thai for dinner. It’s funny where and when her deliberative nature will kick in (I’m still waiting to be introduced to her spontaneous side). Ten minutes later, in the throws of another, different conversation, she looked over at me: “Pad Thai, no shrimp.” I smiled. I like making that dish. And I love my wife. After nap time, I ran to the local grocery store for ingredients and picked up a pound of chicken for the Pad Thai as well as several pounds of beef short ribs. Upon returning home, I put the short ribs on a plate to age for a few days, stuffed everything in the refrigerator, and went downstairs with Titus and Zooey to watch the last Husker basketball game of the season. We beat Penn State easily. Go Big Red!

At halftime I came upstairs to begin cooking. I got the pots and pans out, prepped my vegetables, and paired the activity as well as the food with a glass of rose’ from Lake County winemaking legend, Jed Steele. Steele has been making wine for longer than I’ve been drinking it, and he’s amazing. The 2017 Cabernet Franc Rose’ is a terrific wine. Slightly chilled, it exhibits beautiful strawberry color, a hue that is suggestive of flavors that arrive later upon the palate, along with watermelon and something I’m going to call papaya. Acidic and crisp, there is a suggestion of oak on the palate as well, though I believe the wine is aged in stainless. It has a nice complexity to it, and is refreshing. Best of all, at $17 retail, it’s a tremendous QPR and good to know about heading into rose’/patio season.

As I cooked, I thought to myself that this once-daunting task was becoming easy. I wasn’t scrambling as much in the kitchen as I often do, and the flow-state that I often find myself in while cooking — utterly focused on a single task, wasn’t even necessary. The Pad Thai just seemed to happen, easily in fact, and I had time to lay out a little bar of options for those in my family who don’t enjoy everything that traditionally goes into the dish (Sonja doesn’t like cilantro — boggles my mind).

I called down to Sonja to bring the kids up right before I drained the water from the rice noodles. As she arrived and got the kids situated, I had a thought, which I voiced aloud: “Shoot, I forgot to make eggs — OHMYGODIFORGOTTOCOOKTHECHICKEN!” No wonder things had felt so simple, I didn’t make half the food. In a fit of absent-mindedness, apparently I failed to prepare both eggs and chicken for the Pad Thai, rendering the dish unintentionally vegetarian, something my inner carnivore and rancher roots detests.

With nobody to blame but myself for this incredibly unfortunate predicament, I sat down sadly to what could have been a terrific meal. Sonja, graciously, did not criticize, though Titus was unimpressed with it and in his toddler fashion made no secret of his dislike for all but the broccoli. I couldn’t blame him for his candor. 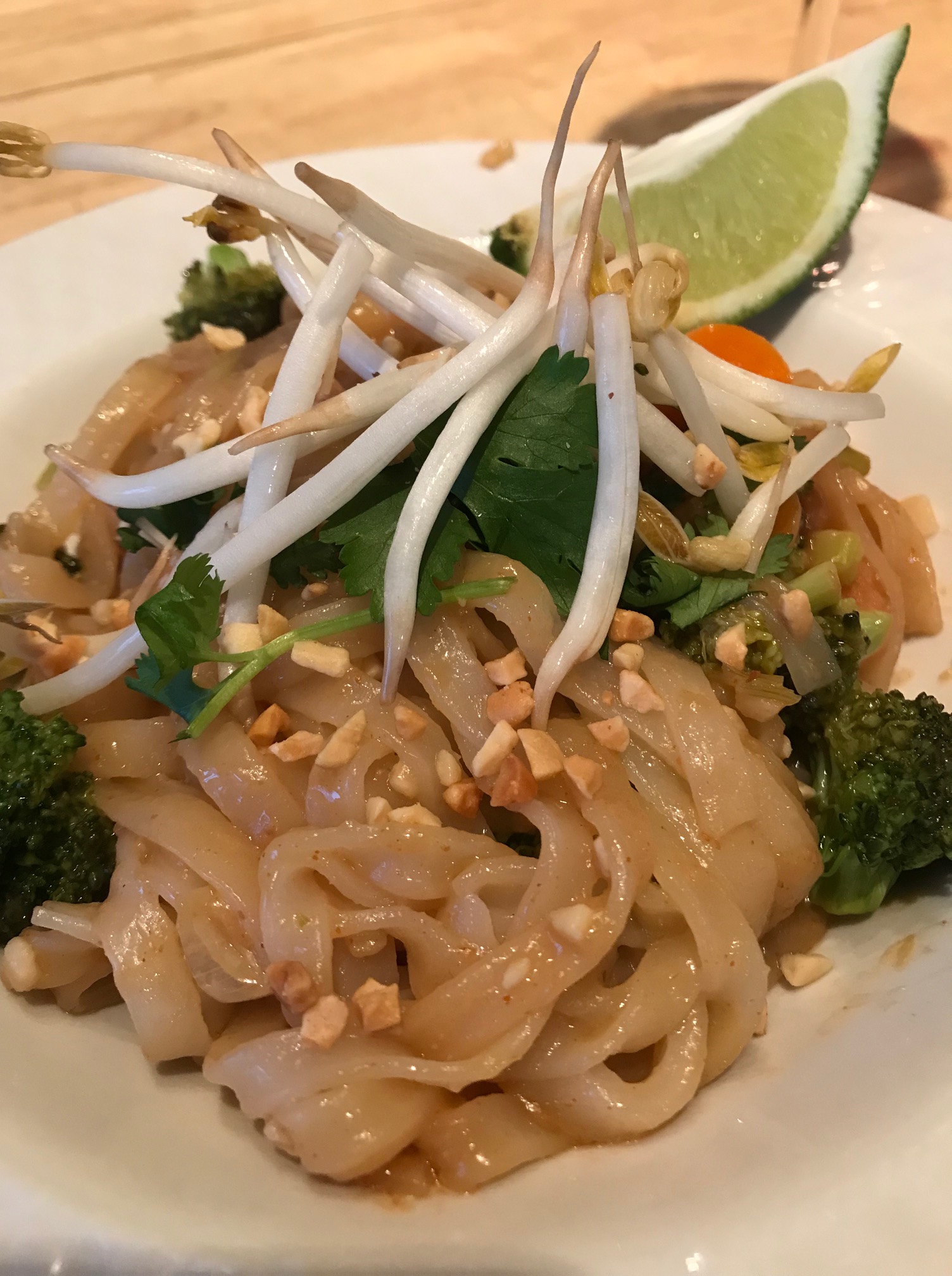 I view cooking from a recipe the way I view painting by numbers; it isn’t art, and it isn’t fun. That said, the artist has to be on his or her game at all times, lest a potential masterpiece turn into a painful reminder of what could have been. I told Sonja I’m eager to make Pad Thai again, and to knock it out of the park this time. The look she gave me counseled patience, bless her heart for being as kind to me as she always is. It’s a rare day that I eat vegetarian food, and to have made a vegetarian dish myself? I never would have thought the day would come. At least we had great wine to pair with it.

Cheers to living through our own mistakes (and to eating dead animals as often as possible),