Sonja and I were in the Napa Valley the first time I had coq au vin — how fitting. Though I’ve spent a fair bit of time in France, Paris as well as the countrysides of Vouvray, my culinary and viticultural experiences nevertheless remain firmly rooted in California wine country. We were at Bistro Jeanty in Yountville after a day of tasting wine, of course, and I wanted something rich and hearty. Once I got done drooling over the wine menu, I decided upon it, with the waiter’s help, and have been a fan of the dish ever since. Then last summer, I borrowed a Dutch oven from a friend and made a passable interpretation of the classic cuisine with a little help from Julia Child.  These days, I make it about once a month, whenever the mood strikes me. Saturday night was one such night.

To me, the secret to good coq au vin lies in the lesser ingredients — the fresh garlic, mushrooms, bay leaves, etc., as well as your ability to coax your red wine reduction into something that gracefully walks the line between rich and mellow. Sometimes I get that right, and others I don’t. The ingredients, however, are non-negotiables. I was especially excited this time around with the extremely thick cuts of pepper bacon I found at Wohlner’s the night before, but equally disappointed by my inability to secure fresh sprigs of rosemary. I soldiered on without it. 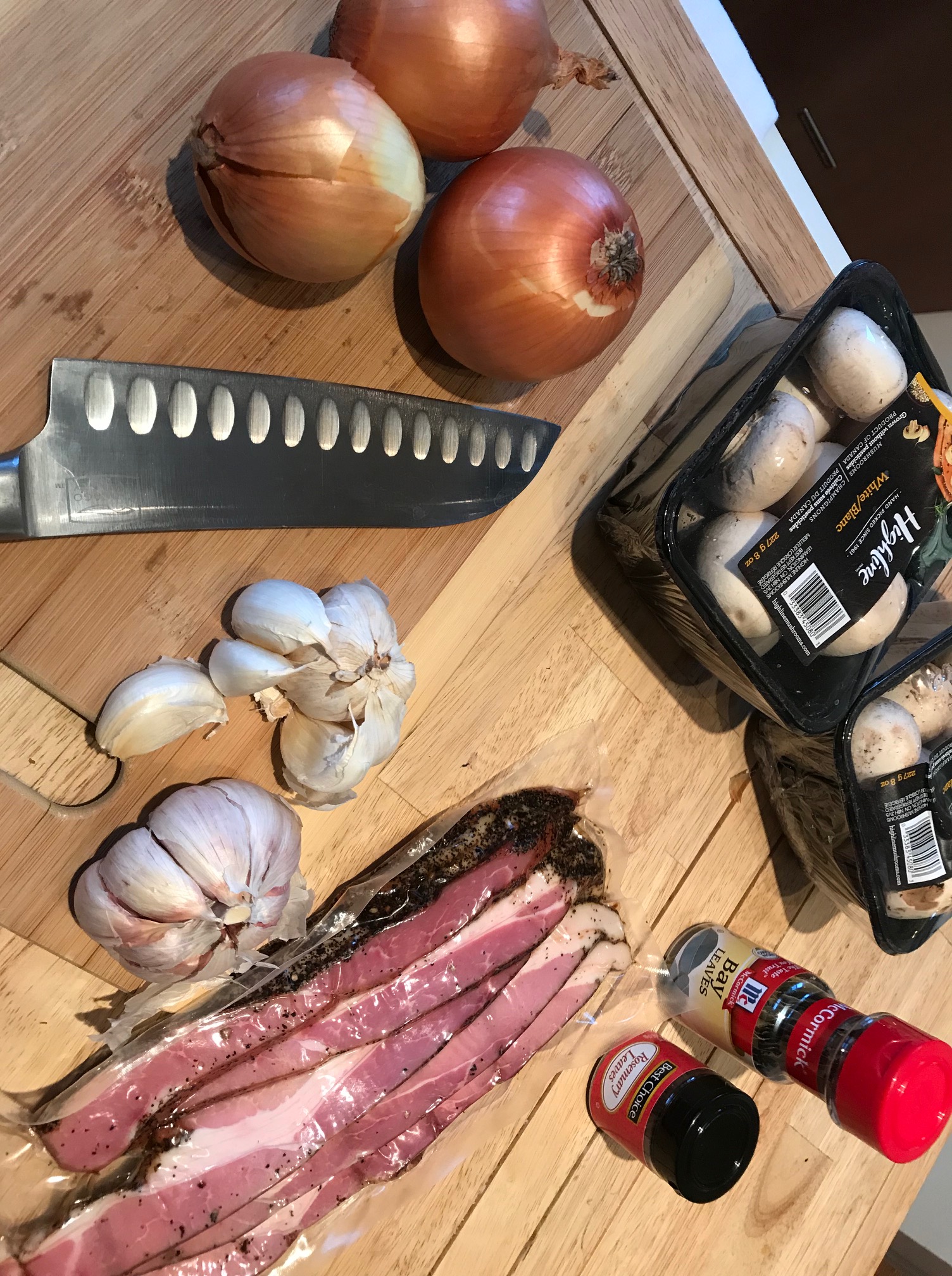 I don’t know a lot that isn’t obvious about old world wines, which is ultimately but one of my seemingly countless shortcomings. I think normally in making French food, I’d have gone with French wine — that would seem logical at least. But when I spend time cooking, I like to pair what I make with wine I have a lot of confidence in. I’ll learn Bordeaux in person soon, but until then, my go-to bottles remain those of the domestic variety, trading in the famous Chateaus for the properties I’ve visited with Sonja along the Silverado Trail.  So tonight, with only one guest joining Sonja and I, I selected a bottle I’d been excitedly cellaring for quite some time, pairing my old world chicken with some new world pizzazz from one of my favorite winemakers, and one of my favorite properties in Napa. 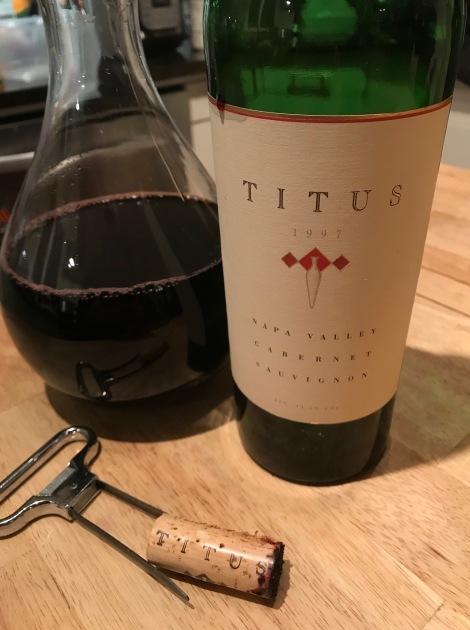 Titus Cabernet Sauvignon is special to me. We did not name our firstborn after this terrific little Napa winery, but neither are we offended when people inquire as to whether or not that is the case. Sonja and I visited Titus a few years ago, had an incredible experience (link below), and are enamored with their wines to this day. The 2015 Cabernets were just released, and I plan to buy some to cellar for our own little Titus, who was born in 2015, to have as something special when he’s a bit older.  This night, he sat at the counter and “helped” me cook. I love cooking, but I love it all the more when I get to spend time with my family while I do it. The question of old world and new world kind of went out the window with Titus and Zooey — my whole world, in the kitchen eating their cheerios as I wrestled mightily with French cooking.

The 1997 was clearly a force back in her day, though time has lent her temperance and long chains of tannins make her as smooth of an old Cab as I’ve had lately. Notes of chewing tobacco and black licorice flirt behind the emboldened purple and black fruits, which remain in plenty despite twenty-two years of age. A quick decant helped the wine to relax a little bit, though it remained inky and somewhat brooding over the course of the nearly two hour meal, during which time it decanted all the while and continued to open up without ever faltering or falling off. What was perhaps best about the wine was that, while I always enjoy old wines for their history if nothing more, Sonja does not, yet she truly enjoyed this one, as did our other guest. Possibly nearing the end of her life, I have one more of these in the cellar that I won’t wait too terribly long to imbibe. If you’ve got one, I recommend you follow suit.

The coq au vin was done before our guest arrived, and while I kept it on a low temp, the chicken still dried out. We ate a light salad with some Chardonnay, then dove into the main course, which I enjoyed despite the less than optimally moist fowl. A better cook would have taken it off the heat sooner, I thought to myself, though ultimately, between terrific wine and wonderful company, any shortcomings of the food were easily overlooked.  In fact, the more I thought about it, the most important thing that had happened in the kitchen all afternoon was not the preparation of the ingredients nor the surgical extraction of an old cork, but instead the time that I was so fortunate as to share with my son while I cooked, and with my wife and daughter upon their arrival shortly thereafter to scavenge for food. In reflection, I loved drinking this 21-year-old Titus, knowing that my own 21-year-old Titus will have his own version of this wine to drink in due course. I love to dream.

I may not be a world-class chef, just like I may not be much of a French wine expert. But I’m interested in cooking just like I’m fascinated by French wine, and it seems to me that you get better at things as time goes by — if you work at them anyway. I suppose you could say the same thing about being a dad and a husband, the two most difficult jobs I’ve ever been tasked with doing.  I’m not great at those things, not yet anyway, though I pray daily to be as good as I can be for my wonderful children and wife, and I’d like to think that, like a good bottle of Napa Cabernet, I’m getting better as time goes by. When I was a young teacher, I didn’t know squat about teaching, but I made up for it with energy and enthusiasm. I suspect the same is true for new-ish dads like me. I may not know everything about how to be a dad just yet, but I suspect that the fact that my entire world revolves around Titus and Zooey will be enough to get us by until I learn.

Cheers to the things (people) that your world revolves around,

Read about Sonja and my visit to the Titus vineyard here: https://itheewine.com/2016/09/29/titus-vineyards-review/