It had been a few years since our New Years tradition had been honored; two kids and other aspects of life having prevented Sonja and I from renting a lodge with friends to leave behind our obligations and celebrate the predictable passage of time in the beauty and serenity of the mountains. This is our vintage tradition, an annual occurrence put on hold when the adjustment of having kids and my brief return to coaching basketball seemed like insurmountable obstacles. We’ve since adjusted to children, I’ve stopped coaching in favor of spending the winter evenings at home with them, and our tradition has now resumed.

We pulled up to the lodge as the darkness was beginning to settle in, a bit before four o’clock. It gets dark early in mountain valleys, earlier still in the winter, and it was a goal of mine to have food out and the fires burning by the time any of our friends arrived. Sonja set about finding a room that would accommodate our two little ones, and I unloaded the car.  Among the things that filled our CRV from door to door, and hood to hatch, were a week worth of groceries, four humans, their suitcases, Christmas presents from previous stops and, of course, wine. 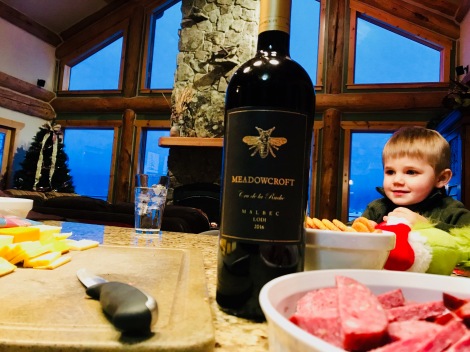 “Cru de la ruche” translates loosely to “vintage beehive”, winemaker Tom Meadowcroft again alluding to the bee that has become his iconic symbol, a diligent agriculturalist creature without which no wine could ever exist. The 2016 Malbec was sourced from Lodi, a change from the Suisun Valley, and one about which I harbored my doubts. Though my experience is largely limited to Cabernet, I’ve always felt that Lodi fruit, by virtue of terroir, sacrificed complexity in favor of bright, popping flavors and thin, very-fine tannins. Rarely if ever have I had a Lodi wine that I felt embodied the complexities of the varietal, or succeeded in reaching its full potential. This isn’t to say that I don’t like wine from Lodi, but merely that I have not yet encountered one that blew me away. Well, until now anyway.

The very color of this wine surprised me as it poured from the bottle, the dark purple notes being deeper than I expect from the typically bright-red Lodi grapes. A gentle nose hinted at layers of dark, ripe plum, blackberry, and caramelized mountain berries upon the palate, all in harmony with some subtle earthy undertones. The wine is perhaps slightly out of balance in favor of these beautiful dark fruits, though that’s not a flaw, as it is due in part to youth and in part to style (think: Dave Phinney’s generally hyperbolic approach to winemaking). The wine is drinking beautifully now, but should age quite well over the next decade plus. I wouldn’t personally go much longer as I love the fruits as they are, unadulterated by time, but how long to cellar this wine will have to be a personal decision. Silky smooth with a lingering, mellow finish, this is, again in my limited experience, quite possibly the best Lodi wine I’ve ever had, and I think also perhaps the best domestic Malbec I’ve had. It really is a special wine, and coming from Tom Meadowcroft, a winemaker from whom I’ve grown to expect only special wines, I can’t say I’m surprised.

I kept encouraging the wine drinkers among my party to try this wine as together we settled into our new home, and of course they did. I went to pour myself one final glass of it for sitting by the fire, lifted the bottle, tipped it, and: nothing. The heft of the bottle had fooled me into believing wine remained, when in fact the last pour went to my very deserving wife. (Side note: something I’ve always loved about Meadowcroft wines is Tom’s use of only the best materials. From bottle to label to cork to foil, the bottle is typically worthy of the wine inside it.) Perhaps the most disappointing thing about this wine is that it isn’t available in Omaha, though I know many who have ordered wine from Tom, or joined his wine club with five-dollar shipping, and not a one who has ever regretted it.

Upon discovering the the bottle was empty, and not wanting to drink a lesser wine after enjoying this Malbec so much, I opted for a few fingers of bourbon to join me by the fire instead. Outside, the snow drifted down in large flakes upon the tree-covered mountainsides, and the threatening negative ten degrees was but an afterthought next to the crackling fire.  This is my family’s vintage tradition, dating back a full decade, made all the more special by the presence of great friends and, as the world has continued to turn, our wonderful children. It’s wonderful to start the new year up here with great scenery, great food, great wine, great friends, and the recognition that life could scarcely be better than it is.

Cheers to all of the many vintages and traditions of our lives,