Wine can be both the best and worst part of flying. To begin with, I don’t fly first-class. I occasionally consider it, in much the same way that I occasionally consider buying a German sports car, but I ultimately always end up thinking about the additional expense in terms of things I want, such as “Gee, for the cost of a first-class upgrade, we could spend another two nights in Florida,” or “Huh, flying first-class costs as much as half a case of Alpha Omega Era.” For that reason, and because I’m cheap (or broke, I forget which is which sometimes), I never fly first class, which in turn makes drinking wine on an airplane somewhat risky.

I probably shouldn’t admit this, but until recently I used to smuggle my own little bottles of JD onto airplanes. That is, until a friend of mine who used to work in the airline industry informed me that this was a felony. Internal dialogue: “I could save around $4.50 by not paying the airline for the liquor, but I could also lose my job and spend six months in jail.” In this instance, a basic cost-benefit analysis prompted me to stop BYOL-ing immediately and for good. I swear. I’ll never do that again. Ever.

This last trip to Napa, I wasn’t too worried about wine on the airplane. There would be plenty of wine waiting for me once I arrived, I reasoned. Still, on the flight from OMA to LAX, I wanted a glass to kick off my work-vacation, so I perused the list in the back of the in-flight magazine (Coach class edition). Here it be:

Before you scoff, just know that most airplane “wine lists” read something like “Red and white wine available.”  This one is actually fairly thorough by comparison, and the fact that they offer any wine produced by a winery I’ve actually heard of was a nice touch.  Not surprisingly, I wasn’t familiar with the Spanish wines, though I was a bit put off by the “Chardonnay/Sauvignon Blanc” phrasing. (That’s not what “/” means.) Still, I gave the Sauv Blanc a shot, and it wasn’t bad. That said, you can’t really judge a wine list on one wine, and I was not in need of a second glass, so I broke out my trusty Vivino app and did a little research on the rest of the wine featured on their wine list. 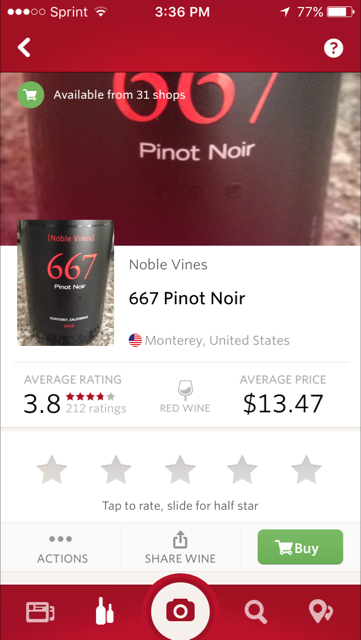 By far the highest rated wine was the Noble Vines 667 Pinot Noir, and while I can’t really imagine drinking a delicate Pinot Noir from a plastic cup, it’s still a pretty fair offering for a domestic airline. The Chateau St. Jean Chardonnay was also interesting. I’ve visited CSJ in the past, and know them to be a high quality producer. And an oaky Chardonnay wouldn’t be damaged much by a plastic cup, if I’m being completely honest.

By and large, American Airlines offers one of the better if not the best wine list I’ve seen from a domestic airline. Is there room for improvement? Sure, but compared to many of their competitors, they’re ahead of the curve. I give AA a grade of B+ for their wine list, and will take that into consideration the next time I’m booking travel.