This Saturday, the 28th of June, 2014 will make the 100th anniversary of the assassination of the Austrian Archduke, Franz Ferdinand, and his wife Sophie. This event is credited as the spark that lit the powder keg and ignited The Great War, a war that did not end all wars, but that claimed the lives of some 37 million human beings and irreparably and irreversibly altered the course of history.

Presently, historians, teachers, and many, many more all around the world prepare to commemorate the centenary of The Great War.  In the United States, the National World War I Museum at Liberty Memorial, located in Kansas City, Missouri, is abuzz with activities and events, all related to the coming hundredth anniversary. There to do work with teachers, it occurred to me that this event is not without significance to our friends in the world of wine as well.  Aside from the utter annihilation of French lands, including but by no means limited to thousands of acres of planted vineyards, as well as the immense overall impact of the war upon our world, an interesting varietal of grape takes its name from The Great War as well. 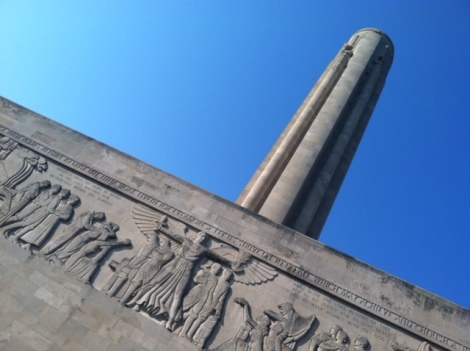 Marechal Ferdinand Foch was born in France in 1851. After schooling, he enlisted in the French army during the Franco-Prussian War, in which France was defeated. He later became a noteworthy military theorist, drawing from his experience.  During The Great War, or World War I, Foch’s successes helped him to climb rank rapidly, and in 1918, Marechal (Marshal) Foch helped to plan The Grand Offensive, which dealt the final blow to Germany. On 1 November, 1921, Foch appeared in Kansas City, Missouri, for the groundbreaking of Liberty Memorial.  He died in 1929, and was buried alongside Napoleon.

The grape that takes its name from Marechal Foch is a hybrid that was created in Alsace, France, by Eugene Kuhlmann.  Today, Marechal Foch, or simply “Foch” for short, is often used to create well-balanced, medium bodied red wines that typically fall on the dryer side of the scale. A good Foch might remind its drinker of a Pinot Noir or perhaps a lighter-bodied Merlot.  The grape, persistent like a good general, grows better in colder climates than do many more recognizable varietals, and can be found in France as well as coast to coast in the United States, from New Hampshire and Massachusetts to Oregon and Washington, and especially in the Midwestern states such as Nebraska, where we are from.

The Great War impacted our world dramatically and in many ways. From the formation of the  turbulent Middle East to the foundations of the cold war, from the strengthening of the women’s suffrage movement to the downfall of numerous longstanding aristocracies, and from the genocide of the Armenians to the immense influence on modern literature including that of Hemingway, Tolkien, Lewis, Kipling and so many more, the war is all around us. On a more basic level, from the war came wristwatches, also trench coats, and of course, the grape we know as Foch. As this weekend fast approaches, I’d encourage you to find a bottle of this dark, rich substance, share it with a friend, and consider the world in all of its complexities, horrors and delights.  A hundred years isn’t much in the grand scheme of things, and what we do with our time now will without a doubt have as great an impact on the next hundred years as the actions of those a hundred years ago continue to have on us today.

One response to “Wine and The Great War”